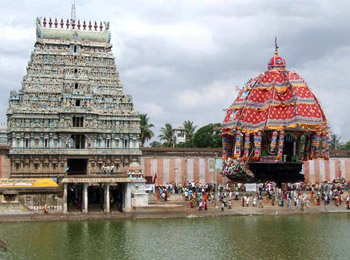 The Thyagarajar Temple is located in Thiruvaiyaru and is dedicated to God Thyagarajar. 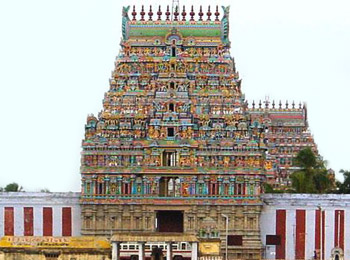 The temple is situated on the northern banks of river Cauvery. Saint Thyagaraja's idol is installed at a place where he attained Jeeva Samadhi. The saint has a Chinmudra and holds the palm leaves containing the Keerthanais composed by him. The idol is depicted with garland of Rudraksha. In the Peeta behind the Saint is the Spatika Linga worshipped by him. Maharshi Narada and Thumburu, the deities of Music adore the entrance of the temple. Sage Valmiki's idol is respectfully installed with Lava and Kusha (sons of God Sri Rama) listening to their Guru. 4 disciples of Sri Thyagaraja are seen around the saint. There are two performance stages outside the temple. Devotees sit on these stages and offer their prayers to Saint Thyagaraja singing his compositions. There is a statue of Smt. Nagarathinammal who founded the Thyagaraja worship tradition. There is the Bodhi tree under which the saint did his singing penance. God Vinayaka and Sri Anjaneya performing penance have their due places in the prakara. Saint Thyagaraja occupies a respectful place among the great leaders of India spiritual heritage. His contribution to Indian spiritual music had left not only the Hindu community but all lovers of music in eternal indebtedness to Him. â€œKarnataka music tradition was pioneered by Annamacharya (15th century), Purandaradasa (16th century) and Kshetrayya in 17th Century. Badrachala Ramadasa, the Advaitic Sanyasi Siva Narayananda Thirtha and Margadarshi Sesha Iyengar were the augmenting influences. The seminal pattern of Kriti or Kirtana having been evolved already, it was for Tyagaraja to handle it with uncanny excellence and become the â€˜foremost composer of Karnataka music. A Kriti is always sung only to the Prince of Ayodhya who was the incarnate God, the complete Avatar, the Supreme Being. Ganga at Haridwar or Kashi is quintessential Ganga. Thyagaraja is the sheer Kasi of the Karnatic music traditionâ€, says learned Sri K.R. Srinivasa Iyengar in his foreword to Sri Tyagaraja a treatise by Dr. V. Raghavan, published by the Sahitya Akademi under the Makers of Indian Literature series.

There are two performance stages outside the temple. Devotees sit on these stages and offer their prayers to Saint Thyagaraja singing his compositions. There is a statue of Smt. Nagarathinammal who founded the Thyagaraja worship tradition. There is the Bodhi tree under which the saint did his singing penance. God Vinayaka and Sri Anjaneya performing penance have their due places in the prakara. Mahabisheka is performed on the Chithirai (April-May) Poosam day, the birth star of the Saint. Since the day prior to Shivrathri, the temple is wide open to the devotees till the next day of Shivrathri. The Aganda Gana performance â€“ without any interval or breaks â€“ goes throughout the day. 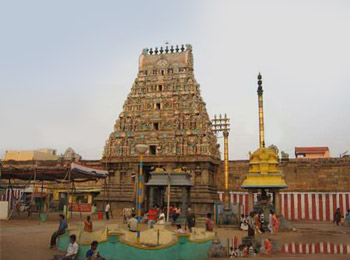 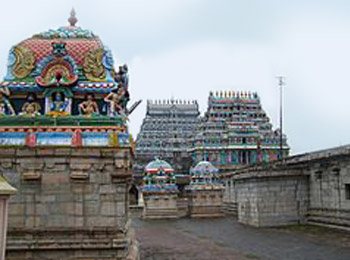 Saint Tyagaraja was the third child of Sangeetha Vidwan Rama Brahmmam and Srimathi Shantadevi. The saint showed signs of music expertise even in his infancy. He was initiated to Gayathri Mahamanta by his father at the age of 8. He inherited the Rama idol from his father and worshipped it with Rama Shadachari Mantra. His mother taught him the compositions of Badrachala Ramadasa and Purandaradasa. His devotion to Lord Rama grew when he learnt Ramayana while at college. He chanted 1.25 lakh Ramanama each day, the number touching 96 crore before He was 38. When he completed age 38, he heard somebody knocking at the doors and when he opened, He saw Lord Rama and His beloved brother Sri Lakshmana on their march for Vishamitra Yaga Samrakshana. He taught music to many. The Brindavan is built at the spot where the Saint attained Jeeva Samadhi.

Shivrathri in February-March and Pancharatna Keerthana festivals are very devotionally celebrated in the Brindavan.

The nearest Airport is Trichy, Chennai

Tiruvaiyaru is 13 km from Thanjavur. The Brindavan is at a short distance from the bus stop.