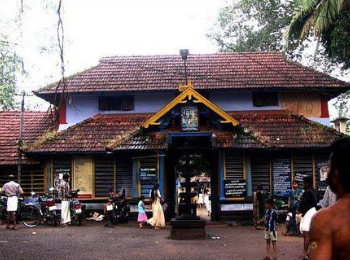 Thriprangode Shiva Temple is a Hindu temple located at Thriprangode, near Thirur, Malapuram district, Kerala. The ancient temple is situated 5 kilometres west of Thirunavay railway station and 10 kilometres south of Thirur railway station. It is one of the most important Hindu pilgrimage centres in North Kerala. The Kokila Sandeśa of Uddanta Sanstrikal (15th century) mentions Thriprangode among other major destinations in the region.

Inscriptions of the Chera ruler Goda Ravi Varma (10th century) were discovered from the Thriprangode Shiva Temple. Later, the region formed a part of the Kingdom of Tanur. The main army led by the Zamorin camped at Thriprangode during the Thirunavaya Wars of the 14th century.

This is one of the most important Shiva temples in Kerala. It is spread over 6 acres, with many sub-shrines, trees and ponds. There is a big banyan tree in front of the temple. Another major tree in the temple complex is Ilanji tree, considered very important to Lord Shiva. The main idol is the self-manifested of Lord Shiva, facing west. There is a temple dedicated to Goddess Parvathi towards the left side of Lord Shiva. There are four more temples dedicated to Lord Shiva in the complex. One is considered the Moolasthanam (the original seat) of the Lord. It is called Karanayil Temple. The other three temples represent the three steps taken by the Lord to kill Lord Yama.

There are five ponds, among which three are in the complex itself. There is a water pond in front of Karanayil Temple, which clearly proves the belief that it is the original seat. Very near, there are two more ponds, named 'Santhikkulam' and 'Vellottukulam'. The pond at the south-west corner of the temple is considered to be the one where Shiva washed his trident after killing Lord Yama. There is a big pond outside the complex in the north-east side. People bathe here before entering the temple.

A unique feature of this temple is that there are three types of Shreekovils (sanctum sanctorum), which are commonly found here. The main shrine is a two-storied in Gajaprishta shape (the shape of the back of an elephant) and is very large in size. There is a southward extension, which encloses the shrine of Goddess Parvathi, thus having the concept of Ardhanarishwar. There is a 'namaskara mandabam' in front of the Shreekovil. Here, we can find the statue of Nandi, the vehicle of the Lord. There is an idol of Lord Ganesh on the south-west door, facing east.

Long time ago, there lived a sage called Mrikandu with his wife Marudvathi. Both were devotees of Shiva. The couple was childless, and decided to perform austerity rituals. Then one day, Lord Shiva appeared before them, and asked if they desired an ordinary and mentally challenged son who would live a long life, or an exceptionally intelligent son who would live until the age of sixteen. In due course, Marudvathi gave birth to a boy and the child was named Markhandeya. Markhandeya was an exceptionally gifted child, and became a sage early in his childhood. He was especially devoted to Lord Shiva, and had mastered the Mahamrithyunjaya Mantra. As he was getting on to be sixteen, Rishi Mrikandu became sad. Lord Yama came to take his life away. The boy, Markhandeya was afraid, he then ran to Lord Vishnu (the preserver) but he was helpless and he directed him to Thriprangottappan (Lord Shiva). On the way to Thriprangode temple there was a huge banyan tree that made it difficult to enter into the temple. Surprisingly, the tree separated into two parts and then he could easily enter into temple. Markhandeya hugged the Shiva Lingam and requested Lord Shiva to protect him from Lord Yama. Lord Yama threw his noose around the boy and it encircled the Shiva Lingam too.

The Shiva Lingam burst open and a fiery Lord Shiva appeared out of the blazing lights. Lord Shiva was very angry and asked whether Lord Yama had this much courage to encircle the Shiva Lingam with his noose, Shiva struck down Lord Yama with his Trident and Lord Yama was no more. Markhandeya escaped from death. Shiva blessed Markhandeya with eternal life and proclaimed that he shall remain as a sixteen-year-old sage forever. The assembly of Devas begged Shiva to revive Lord Yama. Lord Shiva then revived Lord Yama, and declared that His devotees were forever to be spared from the noose of Lord Yama. Since that day, Shiva is called Kalasamhara Murti.

There are regular trains from other major cities to Thirur.

Thirur is well connected to other major cities by regular buses.