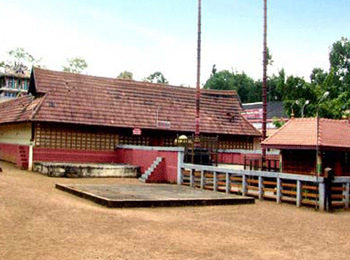 The deity of God Shiva is worshipped at the Shree Mahadev Temple located at Kalanjoor in Kerala. This temple was also known as Sankarapurathu Mukkalvattom Devaswom and Thrikkalanjoor Sree Mahadeva Temple. It is constructed 80kms away to the South-West of Sabarimala Temple. As the temple is situated on the Punular Muvattupuzha Highway, a sacred banyan tree can be seen by the devotees, which announces the presence of the prestigious temple.

There are some mural paintings surrounding the banyan tree that depicts the skills of the artists. The deity of God Nataraja is enshrined inside the Mandapam and the deity of God Shiva is enshrined in a way that it faces the East direction. A Gopuram which is 60 feet high can easily be seen from the Mandapam and there are 18 steps from the Gopuram leading to the holy deities of God Indiliyappan and God Mahashiva. The deities of God Mahashiva and God Sastha are enshrined in the temple in a way that they face each other. Due to these deities, two flag posts coated with copper are places adjacent to each other in this temple which depicts a rare spectacle.

The idol of God Mahashiva is enshrined in the form of a Shivalinga and the shrine is constructed in a circular manner. The ancient Kerala sculptures can also be noticed in the architecture of the temple. Other deities of God Swayambhoo Satha, God Mahaganapathi, God Nataraja, Goddess Yakshi, God Bhoothathan, Goddess Mannadi Bhagavathi etc. are installed in the temple. Gopurams on the East and the West are also created artistically to decorate the temple. The Anakkottil and Nada are another rare specialties.

As per a legend, Saint Khara also conducted a penance for God Shiva at this temple and God Shiva being happy with his efforts appeared before him. After this Saint Khara installed 3 Shivalingas at equal distances in the east-west direction. The first Shivalinga was enshrined at Kalanjoor, the second one at Periganad and the third one at Arukalikkal. Kullakkada Thamarassery Nambi conducts the thanthram at this temple and the current thanthri of this temple is Bhramasree Ramesh Bhanu Bhanu Pandarathil.

Inside the mandapam of the temple,there is an idol of Nataraja, the dancing manifestation of Lord Shiva, facing the east. From this Mandapam towards the west, a 60 feet high Gopuram could be seen on the eastern side. The 18 ascending steps from the Gopuram lead to the sacred idols of Indiliyappan (Sastha) and the Mahashiva idol.

Bnayan Tree is the sacred tree grown near the temple.

The auspicious festival that begins with the Malayalam month of Meenam and finishes with Thiruvathira Arattu is celebrated in the temple. As the festival goes on for eight days, Indilayappan festival is celebrated on the sixth day as all the renowned artists from India become a part of it. During the celebrations, great performers of Carnatic music like Balamuralee Krishna, Seshagopal, Yesudas, Chembai etc. also participate. Kathakali is also performed by the artists to celebrate the joy of this festival. Apart from this, festivals like Kalamezhuthum Pattum for Indiliyappan (Sastha), Shivaratri, Ashramirohini, Ponkala, Pathamudayam, Vinayaka Chaturthi, Mandalpooja etc. are also celebrated. The devotees offer Pillavaipu, Pushapanjali, Jaladhara, Therali, Mrithyunjaihomam, Unniappam and Adithyanamaskaram at the temple.

The devotees can easily reach the temple by taking road transport going from Elamanoor to Kalanjoor. Frequent bus service is available till the temple.