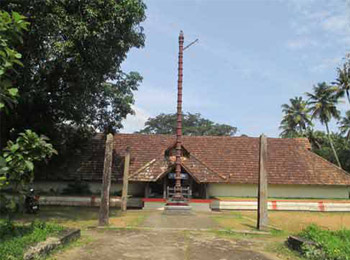 Thrichittatt Maha Vishnu temple is located 2 km away from Chengannur. It is believed to have been built by Yudhishtra,the eldest of the Pandavas. It is one of the pancha pandava temple circuits.It is an very ancient temple going by the fact that it is mentioned by Nammalvar, a Vaishnav saint who lived in 3102 BC. He has sung songs on the deity of the temple and the place.

The Lord faces east and the holy tank is known Shanku Teertam (or tank of the conch). Unlike other Vishnu temples, the Lord holds the conch in his right hand instead of discuss. There are also shrines for Sastha and Lord Krishna.

The main murti worshiped in the shrine is Vishnu in standing posture. It is made using Krishna Shila. The unique aspect of the murti is that it holds conch in right hand instead of the discus or chakra. Subsidiary deities worshiped in the temple are Ganesha, Sastha and Goshalakrishan. Goshalakrishan has a separate quite big shrine in the temple complex. He is offered special pujas. Special rituals are observed during festivals. The temple pond is known as Shankha Theertha. The temple has a large Nalambalam and Namaskara Mandapam. Wooden carvings are another noteworthy feature. The sanctum sanctorum is round and is made out of huge stones.

Lord Vishnu is worshiped here as Imayavarappan. It is believed that the murti worshiped in the temple was first offered prayers by Devas or celestial beings. Imayavar means Devas. As per 108 Divya Desham concepts, Vishnu worshiped here is known as Devathideva Perumal. There is no murti of Goddess Lakshmi in the temple. But the divya desham concept mentions the presence Goddess Lakshmi in the shrine as Raktapankaja Valli. In the Mahabharata war, Dronacharya was invincible. To kill him Yudhishtira uttered the lie that Ashwathama, his son died. After hearing the words from the mouth of Yudhishtira, Drona put his weapons down. Dhrishtadyumna used this opportunity and cut off the head of Dronacharya. Yudhishtira carried the remorse of lying for a long period. It is believed that he did penance at Thrichittatt Mahavishnu Temple for the sin. He installed the murti and offered prayers to it here.