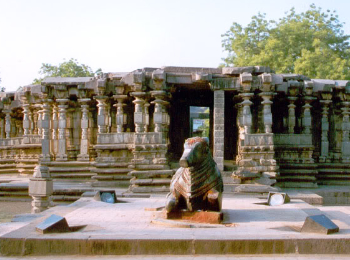 
The Thousand Pillar temple of Hanamakonda is dedicated to Lord Shiva, Lord Vishnu and Lord Surya. The city of Hanamakonda, is located in Andhra Pradesh, India. It is situated on the Hanamkonda Warangal highway, about 150 kilometres from the city of Hyderabad. The temple is designed in star format. It includes several small shrines and lingams.  Trikutalayam, the three shrines of Shiva, Vishnu and Surya, inside the temple is surrounded by a big garden containing many small lingam shrines.1, 000 richly engraved pillars and a Nandi, the sacred bull of Lord Shiva can also be seen in the temple. The Nandi bull is made of a black basalt monolith which is highly polished. 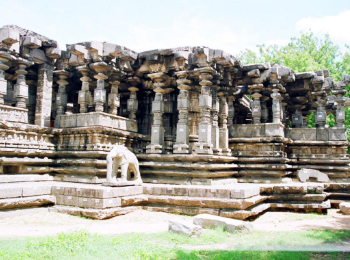 The Thousand Pillar Temple of Warangal one thousand ornately carved pillars, reveals the grandeur of the Chalukya kings. Built in a distinctive Chalukyan style of structural design by King Rudra Deva in 1163 A.D., the temple includes three concentric shrines, devoted to Lord Shiva, Lord Vishnu and Lord Surya. The Thousand Pillar Temple has been constructed at the foot hill of the Hanamkonda hill. As the name indicates, there are one thousand intricately carved pillars of wide variety and different sizes. The pillars of the main temple are firmly entwined and form its parapet. Apart from the lavishly engraved pillars, the temple also has subtle smokescreens, excellent masonry, and exhaustive and elaborate statues that will leave you captivated. The combination of the three shines of the temple, devoted to Lord Shiva, Lord Vishnu, and Lord Surya is celebrated as Trikutalayam. Of the three shrines, Shiva's shrine has been located facing the east while other shrines face south and west. This was so, because the Kakatiyas were great devotees of Lord Shiva and desired early morning sun rays to fall straight on Shiva Lingam. On the fourth side of the Thousand Pillar Temple is Shiva’s holy bull, Nandi. It has been carved out of a massive black stone, which is an remarkable piece of art. Adding to its exclusiveness, the Nandi in the Thousand Pillar Temple faces east, unlike most Nandis in Indian temples that face west. Surrounded within these four corners is the ‘Natya Mandapam’ where dancers performed. The pillars that support this innermost hall of the temple are large and made of numerous blocks of stone. Numerous minor shrines dedicated to the lingam, i.e. Lord Shiva, encircle the huge lawn of the Thousand Pillar Temple. Gracefully carved rock-cut elephants constructed on both the sides of the temple entrance are wonderful images. Presently, the temple is being maintained by the Archaeological Survey of India which has acknowledged it as one of the endangered shrines. 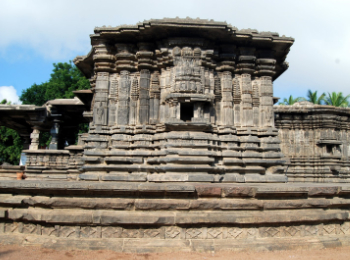 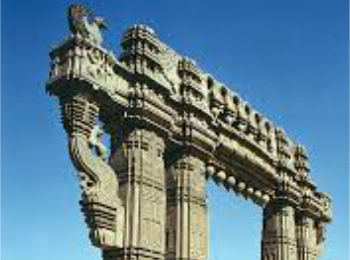 Numerous Hindu temples were established under the support of Ganpati deva rudra deva and Pratapa rudra of kakatiya dynasty Few temples such as the Badrakali temple at Warangal and thousand pillar temple in Hanamkonda are well-known in India . The Thousand Pillar Temple was constructed during the period of the Kakatiya dynasty, probably in 1163 AD by order of the king. Ganpati deva established number of temples in kaktiya ruling in Orugallu - Hanamkonda, Warangal Rudra Deva. It stands out to be a work of art and attained great heights in terms of architectural skills by the erstwhile Kakatiya Vishwakarma sculptors. It was demolished by the Tughlaq dynasty during their assault of the Deccan. It consists of one temple and other structures. There are 1,000 pillars in the structures, but no one pillar blocks a person from any point of the temple to view the god in the other temple. Modern engineers have removed all the pillars. After they lifted all the pillars they met a huge mass of sand. It took closely two weeks for them to remove all the sand. It was wet sand, because of a pipe connection from the nearby water body named Bhadrakali Cheruvu. 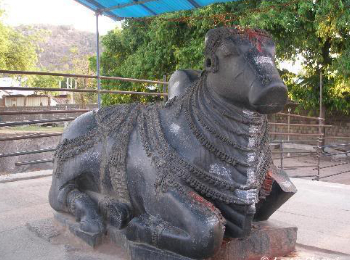 
The city of Warangal has excellent accommodation facilities available.


The best time to visit the Thousand Pillar Temple is during the winter months of October to March when the weather is pleasant in Warangal.


The Thousand Pillars Temple is located in Hanamkonda part of the Warangal City. It is about 6 kms away from, Warangal Railway Station & Bus Station 9 kms away from Kazipet Rly.Junction and is well connected by city bus service.