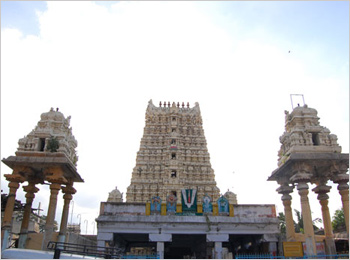 
This Divyadesam is a huge temple situated in Tirukkovilur, which is also home to the Tirukkovalur Veerattam, a prehistoric shrine glorified by the Tevaram hymns. Tirukkovilur is considered to be one of the Pancha Krishnaranya shrines. This shrine represents the physical meeting point of the first of the Alwars Poikaialwar, Bhutattalvar and Peyalwar. The Divya Desams enshrining Trivikrama are Tiru Oorakam (Kanchipuram), Tirukkovilur, Kaazhicheeraamavinnagaram and Tiruneermalai. 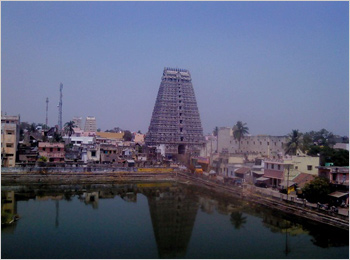 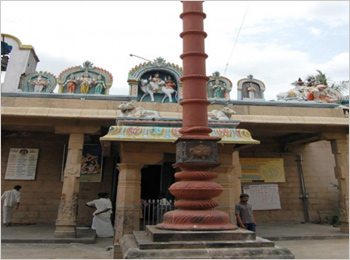 The presiding deity of this temple is ‘Lord Thrivikrama Perumal‘ or ‘Lord Ulagalantha Perumal‘ (Lord Vishnu) and the Goddess is ‘Poongothai Nachiyar‘ (Goddess Lakshmi).The other main deities of this temple are Lord Venugopala, Lord Lakshmi Narayana, Lord Lakshmi Raghava, Lord Lakshmi Narasimha, Lord Rama, Lord Veera Anjaneya, Goddess Andal and Shukracharya, the Guru of Asuras. The location of this temple is said to be the place where the first three Azhwars, the great saints Poigai Azhwar, Bhoothathazhwar and Peyazhwar attained salvation. The Pushkarani (temple tank) of Ulagalantha Perumal Temple is called as Pennar and Krishan Pushkarani. The Vimanam (the tower above the sanctum sanctorum) is called as Srikara Vimanam. This temple is said to be the place where the great canon Nalaayira Divya Prabhandham got initiated by the Azhwars. 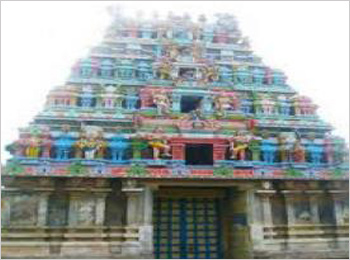 According to the legend, Vishnu took the form of Vamana, to subdue the demon king Mahabali, took on a gigantic form and occupied the earth and the heavens and rested his foot upon Mahabali's head and exiled him to the another world. This is a huge temple with a magnificient Rajagopuram which can be seen from a distance. Covering an area of 5 acres, it has three prakarams. There is a small shrine for Vamanar (Vishnuâ€™s avatar) behind the image of Trivikrama. An Ardhamandapam, a Mahamandapam, and the Pandya Mandapam are seen in front of the sanctum. There are also shrines to Lakshminarayanar, Lakshminarasimhar, Andal, Udayavar, Senai Mudaliyar, Manavala Mamuni, Chakrattalwar, Poonkoyil Naachiyaar (Pushpavalli), Varadarajar and Venugopalar here. There is also a Ramar temple behind the Taayar shrine. This temple was initially a brick and cement structure in the period of Parantaka Chola I, it was patronized by the great Chola rulers Raja Raja Chola I and Raja Raja II. It was rebuilt of granite by Rajendra Deva in the 11th century. Legend has it that the three Alwars (Poikaialwar, Bhutattalwar and Peyalwar) took shelter in the haven of Mrikandu munivar, in confined quarters on a stormy night when they felt the prodigious of the fourth person, who was none other than Perumaal, later upon whom they composed many number of poetries in praise. This is where the first poetries of the Alwars came into being.


Viluppuram has a well-known railway station. The Viluppuram Railway Junction at Viluppuram serves as the distribution point of rail traffic from Chennai, the state capital of Tamil Nadu, towards the southern part of the state.


Viluppuram is well connected by roads to major cities and to the rest of the state. Villupuram has the longest National roads of any district in Tamil Nadu, which connects all the major cities.