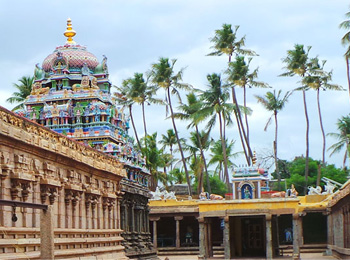 Thirumohur Kalamegaperumal Temple is a hindu shrine located near Melur in the Madurai district of Tamil Nadu, India. The temple is one of the "108 divya desams" of Lord Vishni and lies 12 km north-east of Madurai. It is also known as Mohanapuram and Mohanakshetram.

The presiding deity of this temple is Kalamegaperumal. The Lord himself is believed to have led Nammalvar to Vaikunta. Thirumohur is considered the Divyadesa where Maha Vishnu is said to have taken the form of Mohini (enchanting woman form). Visiting this temple to worship the beloved Lord guarantees salvation to the devotee.
The Ksheerabthi Nathar and the Thayar in the shrine are in a praying pose before the presiding deity and this is known as Prarthana Sayanam.

Sri Sudarsanar, also called as Sri Chakkarathalwar has 16 hands with 16 different weapons in this temple. His feet are seen rolling and the idol bears holy letters. This is the only temple where Sri Sudarsanar is said to possess all the above mentioned aspects. Despite the presence of Sri Sudarsanar in other revered Vaishnava temples in Srirangam, Kancheepuram and Srivilliputhur, this is the only shrine where he appears with such holy letters. Behind the Chakkarathalwar is Yoga Narasimhar, also known as Narasimha Sudarsanam.

Kalamegha perumal kovil is among one of the pandiya naatu divya desams of Sri Vaishnavas. There are four prakarams to the temple. The moolavar is Kalaamegha perumal in nindra thirukolam and in same posture like Varadharaja perumal of kanchipuram with gadhe in the left hand and right hand as if blessing the devotees. The utsavar is Thirumogur aapthan. The utsavar here is found with pancha aayudams. There are sculptures of Lord Kondanda Ramar, Sita, Lakshma, Kamadevan and Rathidevi in the Garuda mandapam of the temple.

The temple stands unique and special because of the presence of Sri Chakratalwar with 16 hands and each hand holding a different weapon. Lord Narasimha is found behind chakratalwar with the sacred coonch (shanku) and chakra. There are 154 alphabets carved in the 6 circles. Images of 48 gods are found in it. Sri Chakratalwar appears in the Prathyaaletha posture which indicates his readiness to help the devotees at all times.

The place got its name “Moghur” because it is believed to be the place where Lord Vishnu took the Mohini form to ensure that the devas got the amrutham that came out from churning of the ocean, rather than the evil asuras, so that the devas get back their lost powers. It is believed that a drop of amrutham fell into the temple tank and hence it is also known as periya thirupaarkadal and siriya thirupaarkadal.

There is yet another sanctum where the lord is seen giving darshan in the Prathana Sayana thirukolam, over adisheshan, along with Sridevi and Bhoomidevi thayaar, who are praying at the Lord's feet. An interesting fact is that adishesan appears to have a thanga kavacham . Thisform of the Lord was prior to the Lord taking Mohini avatharam.

The temple is quite huge and is situated in a area covering 2.5 acres of land. The rajagopuram (main towet) is five tiered. The temple is believed to be more than 2000 years old and finds mention in ancient Tamil literatures such as akananuru, Padhitrupathu, maduraikanchi. The temple is also referred in one of the greatest Tamil literatures of all time, the Silappatikaram. There are four prakarams withon the temple. The chief deity (Moolavar) is Kalamegaperumal in panchayudha kolam and graces in a standing position. The Thayar is named Mogavalli Thayar. Utsavar is Thirumogur Aabthan and the temple tank is called the Kshirabtha Pushkarini. Chief tree of this temple (Thala Viruksham ) is Vilvam and the Vimanam( tower) is Kethaki Vimanam. The Prathanasayana appearance of the main deity is not found anywhere in 108 divya desam temples. The Sudarshana Chakra of this deity is very famous.

When the devas were churning the ocean for Amrut, a drop of Amrut is said to have fallen into this temple tank. The Lord is believed to have appeared south of this tank.

The front of the Sudarshana Chakra is Chakrathazhvar and the back side is Narasingha Perumal, situated amidst 48 fairies and inside the six circles there are 16 aayuthams with 154 letters. Perumal is depicted with 16 hands and three eyes glowing like fire.

The nearest airport is Madurai Airport.

The nearest railway station is Madurai.

Tirumogur is 10 km from Madurai. Buses are available from Central and Mattuthavani bus stands. The temple is near the bus stop.