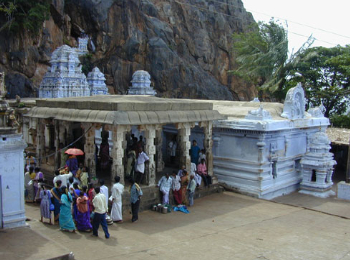 The Theerthamalai Temple is a Theerthangeswarar and Arulmozhi Vadivambigai temple located in Harur taluk of Dharmapuri District, which is 60Kms from Dharmapuri on the way to Thiruvannamalai via Aroor,Tamil Nadu. It’s meaning is hill with Holy Water. God Rama got rid of his sins of killing so many demons in the war against Ravana. It is a temple of Lord Theerthagireeswar (Lord Shiva) and is popular as a pilgrim and picnic center. It is situated about one km. up the steep slope of a hillock. The temple is full of devotees during the festival of Mahashivarathri. There are many inscriptions present here which depict that, Chola and Vijaynagar kings were liberal donors of this temple. The “Rama Theertham” spring in the temple complex, is believed to have been made by God Rama. 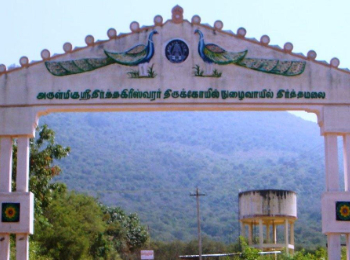 The temple got it’s name from the five springs in the temple. As per the old puranas the two places where Lord Rama worshiped Shiva during his Ramavathar are Rameshwaram and Theertha malai. Rama had sent Hanuman to fetch water from the River Ganga to worship Shiva. As Hanuman could not return at the appointed time of pooja, so, Rama marked an arrow on the rocky slope of the hillock. As a result water poured out of the rock , which today is called Rama Theertham. Thus it has become a site to get rid of sins by having a dip in this water. The waterfall is perennial. There are four other theertham, are originated from different parts of the rocks. They are the Agasthya Theertham, AgniTheertham, Kumara Theertham and the Gouri Theertham. Apart from these four, the Hanuman Theertham is located on the banks of river South Pennar at about 16 kms from the main temple. As the story associated with this theertham says,when Hanuman returned with the Ganga water and saw that already Lord Ram had arranged for the water, he in anger threw the vessel containing water at the river bank. Hanuman Theertham is also considered a holy place. It is located on the way from Aroor to Oothangarai. According to the traditions, one should first go to Hanuman theertham and consequently to Theertha malai to get full blessings of Theerthangeshwarar. There is sweet water in the spring even when the river is dry during summers. These waters also have great medicinal values. Theerthamalai has huge magnetite iron ore reserves. One more spring known as Vashista Theertham is higher up on the hill. There are wonderful granite pieces of Saptha kanyakas close by. The interesting part about these sculptures is that they can be viewed only through a very narrow crevice which is in the rock. The nine-day annual festival at the Temple is in the month of March. Many inscriptions found in the Theerthagireeswarar Temple, are related to the Vijayanagar and Chola rulers. Inscriptions in ancient Telugu and Kannada languages are also present. This Temple of Theerthagirieeswarar has been referred to in the compositions of Poet Saint Arunagirinathar. Sila Naicken had built a Mandapam nearby the sanctum sanctorum. He had maintained a garrison which was on the top of the hill. A commanding view of the surroundings on all sides could be seen from here. 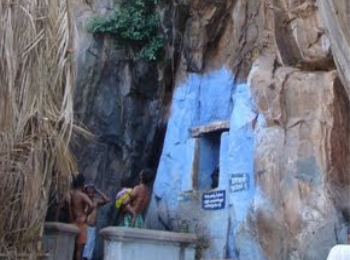 While returning to Ayodhya after the Victory from the war waged against Ravana, Ram wanted to perform Shiva Puja in this place. As Sri Hanuman could not return in time with holy Ganga water and flowers from Kasi, Rama shot an arrow on rock creating the Rama Theertha and completed the puja. The Rama Theertham is tiny waterfall drops from a height of about 30 feet is perennial. During summer even when the river is dry there will be sweet water in the spring that flows from rock.Sri Hanuman threw the pot of water from here which fell at a distance of about 12 km from the hill and that became Hanuman Theertham. People take the first dip in Hanuman Theertha and then at Rama theertha for relief from sins.

The famous festivals of the temple are the 10 day Masi Brahmmotsavam in February–March with procession of the presiding Lord, car festival on the 7th day, wedding festival on the 5th day and Sathaparana festival – Lord in reclining posture on the 10th day; Abishek pujas with 365 litres of milk on the Chithirai new year day falling mostly on April 14 or a day earlier or later occasionally, Navarathri in September–October and Aadi 18 July–August with special abishek at night followed by Girivalam – circumambulation of the hill. The temple is mostly crowded on Saturdays and Sundays. Pradosha is devotionally observed. Also Tamil and English New Year Day are observed in the temple.

People pray here for mental peace, relief from diseases, child boon and family prosperity and release from debt burdens. They believe that Lord and Mother hold the solution for all their problems. Those seeking child boon use to tie a cradle and also tie threads around the anthill. They also tie thread around the Pavalamalli tree for wedding boon. People also tie the thread around the anthill for relief from the adverse aspects of serpent planets. The wind carrying the smell of the herbal plants around the hill improves the health of the devotee while going up and coming down.

Madurai is the closest Domestic air terminal, Trichy has an international terminal too.

Cabs or buses can be hired from the nearest bus station.

It is well connected with Rail head. The nearest Rail head is at Dharmapuri.