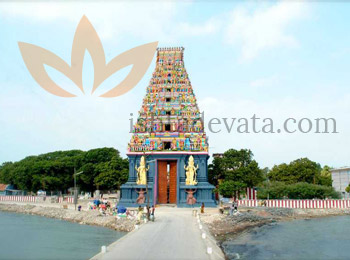 The Nainativu Nagapoosani Amman Temple is an ancient and historic Hindu temple. It is located in Jaffna, Sri Lanka. It is dedicated to Parvati who is known as Nagapooshani or Bhuvaneswari and her consort, Shiva who is named here as Rakshaseshwar (Nayanair). 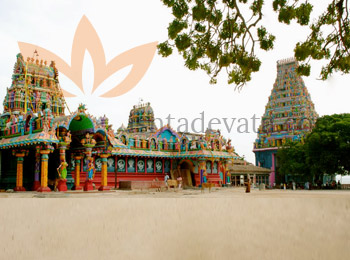 In Hinduism, Bhuvaneshvari is the fourth of the ten Mahavidya goddesses and an aspect of Devi, as elements of the physical cosmos, in giving shape to the creation of the World”. Also Bhuvaneswari is considered as the supreme goddesses who creates everything and destroys all the unnecessary evils of world. She is also considered as the Mother goddess of Kali, Lakshmi, and Saraswati also Gayatri. In Hindu Mythology she is considered as the most powerful goddess in the universe. Parvati is Sagun Roop of Goddess Bhuvaneswari. Her bija mantra is “Hreem.” She is also known as Adi Shakti i.e. one of the earliest forms of Shakti. She is capable of turning situations according to her wish. It is considered that even the navagrahas and trimurtis cannot stop her from doing anything. She can order the Trimurtis to do anything she wants.

The Nainativu Nagapoosani Amman Temple is believed to be originally established by Lord Indra while seeking alleviation from the curse of Gautama Maharishi. The Sanskrit epic Mahabharata records that Lord Indra was overcome by his sexual desires for Ahalya, the wife of Gautama Maharishi. Indra disguised himself as the saint and proceeded to seduce and make love to Ahalya. When the saint came to know, he cursed Indra to have a thousand marks resembling the yoni (female reproductive organ) all over his body. Indra was ridiculed and referred to as Sa-yoni. Unable to face the humiliation, he went into exile to the island of Manidweepa (Nainativu). There, he is believed to have created, consecrated and worshiped the moolasthana murti of the Goddess to atone for his sins. The Queen of the Universe, Bhuvaneswari Amman, satisfied with Indra’s utmost devotion, repentance and remorse appeared before him and transformed they yonis on his body into eyes. She then took on the name of “Indrakshi” (Indra Eyed). Another legend states that, many centuries later, a cobra (Nagam) was swimming across the sea towards Nainativu from the nearby island of Puliyantivu with a lotus flower in its mouth, for the worship of Bhuvaneswari Amman (who had already been consecrated by Indra). An eagle (Garuda) spotted the cobra and attempted to attack it and kill it. Fearing harm from the eagle, the cobra wound itself around a rock (referred to in Tamil as; Paambu Sutriya Kal “the Rock around which the Snake wound itself”) in the sea about half a kilometer from the Nainativu coast, and the eagle stood on another rock (Garudan Kal “the Rock of the Eagle”) some distance away. A merchant by the name of Maanikan from the Chola kingdom; who was himself a devotee of Sri Bhuvaneswari Amman, was sailing across the Palk Strait to trade with the ancient Naka Nadu noticed the eagle and the cobra perched upon said rocks. He pleaded with the eagle to let the cobra go on its way without any harm. The eagle agreed with one condition that the merchant should construct a beautiful temple for Sri Bhuvaneswari Amman on the island of Nainativu and that he shall propagate her worship in the form of Sri Nagapooshani Amman for universal peace, prosperity and humanity. He agreed and built a beautiful temple accordingly. The eagle took three dips into the ocean to atone for its sins against the Nagas in the Mahabharata, and hence, the Garuda and Naga resolved their longstanding feuds.

The original temple was looted and destroyed by the Portuguese in 1620 CE. The modern day structure was restored and re-established in 1788. The temple was later attacked, burnt, and sustained severely damaged, in June 1958, and in March 1986 by the Sri Lankan armed forces. The Nagadweepa Buddhist Vihara which is a few meters away from the temple was established in the 1940s by a resident monk with the help of local Tamils.

The annual 16-day Mahostavam (Thiruvizha) festival celebrated in July attracts thousands of pilgrims who come to perform rituals at the Nagapooshani Amman Temple. Worldwide Hindu festivals, such as Navrati (end of September - October) and Shivrati (end of February - beginning of March), also attract many devotees and visitors from within the country and from across the sea. 15 priests perform rituals in the temple on a daily basis and for specific festive occasions. There are 6 pooja (rituals) held every day: sacred bath, decoration, food offering, and waving of lamps, all accompanied by musical instruments, around the giant mandala (circular pattern) in the center of the temple.

There are no foreigner-oriented hotels in Nainativu. It is possible to stay at the temple housing (for about 150 LKR) south of the jetty, next to the Nagapooshani Amman Temple. However, you will end up sleeping on a thin floor mattress and will be served the most humble food, so this qualifies more as an ‘experience’ rather than ‘accommodation’. Usually, it is possible to visit Nainativu in one day and return to Jaffna (Wikipedia Article) for the night.

Wild camping on the island is accepted, the locals might be surprised but will definitely not prohibit you from pitching a tent on the beach. Moreover, there is a big chance that you will get invited to stay over in somebody's house, enjoy the cold bucket shower and homemade curry.

As for culinary delights, there are a few local eateries around the island, that usually double as souvenir shops. Nainativu serves typical Sri Lankan food: a lot of fried rice, coconut milk, dhal (lentils) and vegetables. Food here is mostly vegetarian, although fish curries and shrimp fried rice are also quite popular, accompanied with fried roti bread and eggs.