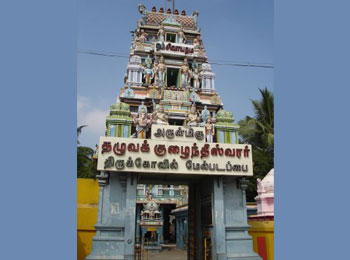 The Thazhavakuzhaindeeswarar Temple is located in Mel Padappai, Kanchipuran district in the Indian state of Tamil Nadu (Chennai suburb). The temple is around 1 km away from the Padappai bus terminus.

Thazhavakuzhaindeeswarar Temple Pallava King Nandi Varman ruling this region during 7th century renovated 108 Shiva temples simultaneously and conducted the consecration of all temples in a single day. This is one among these temples.Lord Vinayaka in the temple is praised as Vettri Vinayaka. The temple has a 3 tier Rajagopuram.

Padappai in Tamil means garden of flowers. The place is so named as Lord Shiva blesses His devotees at a place surrounded by flower gardens. Saint Tirugnana Sambandar, has mentioned this place in his Thevaram hymns while praising Lord Vurddhagiriswarar when passing through this place. Hence, this temple is considered as Vaippu Thalam – having a mention in Thevaram hymns with other Shiva temple.

Vinayaka of the Temple is praised as Vettri Vinayaka as He is all graceful to His devotee ensuring success in his endeavours – Vettri in Tamil means success. He has elephant as His vahan instead of the traditional mouse. Special pujas are dedicated to Vettri Vinayaka with white vastras on Mondays.

Moon married 27 daughters of Daksha including Kruthika and Rohini but was very fond of Rohini alone ignoring other wives. Aggrieved wives complained to their father Daksha of Moon’s partial attitude towards them. Angry Daksha cursed Moon that his bright rays – Kalais – go dark. Seeking relief from the curse of his father-in-law, Moon came to earth and worshipped Lord Shiva in many places. He came to this place also.

The rays of Sun fall on the presiding deity during the first 7 days of September. Mother Kamakshi is facing south from a separate shrine. She Looks with Her ears slightly on the right as if to hear Lord Shiva. Devotees believe that praying to Kamakshi would tighten the unity among couple. Mothers Vaishnavi, Mahalakshmi and Sarawathi grace the devotees from the goshta of Ambica shrine. Special pujas are performed to Lord and Mother on full moon days. Those facing delays in marriage pray to the divine parents placing the mangal sutra thread at the feet of Lord and Mother and tie them in the Magizha tree in the temple complex. This is based on the event of Lord Shiva solemnizing the wedding of saint Sundarar with Sangili Nachiar under a Magizha tree in Tiruvottriyur temple.

The activities of Earth came to a halt when Mother Parvathi closed the eyes of Lord Shiva in a playful mood. Lord Shiva cursed Mother to be born a human on Earth and perform penance in a place called Mangadu to get Him back. Lord Shiva granted darshan to Acharya Sri Sankara at this place and directed Mother Parvathi to shift to Kancheepuram to continue the penance. On Her way to Kancheepuram, for Her own satisfaction, She installed a Linga here too, it is believed. At Kancheepuram, Mother made a Linga of sand and embraced it when floods threatened to wash away the Linga. Hence, the Lord is called Thazhuva Kuzhainda (pleased with embracing) Easwara-Lord. With a small change, the name became Thazhuva Kozhundu Easwarar.

Vaikasi Tirugnana Sambandar Gurupuja in May-June; Aadi Pooram in July-August; Navarathri in September-October; Mahashivrathri in February-March, Tirukarthikai in November-December and Wedding Festival in Panguni Uthiram in March-April are the festivals celebrated in the temple.

Special pujas are offered to Lord Veerabadra in the prakara on Shivrathri day with sandal paste and betel leaves garland. There is a shrine for Lord Bhairava also to whom special pujas are offered on new moon days and Ashtami the eighth day of the new moon fortnight. Lord Sarabeswara has His shrine in the temple where those with confused mind pray for clarity on Sundays during Rahu Kalam time – 4.30 p.m. to 6.00 p.m. – offering curd rice as nivedhana. There are shrines for Lord Tiruvaleeswarar with Mother Nallazhagi, Lord Kasi Viswanatha and Lord Muruga with His consorts Valli and Deivanai. Saint Tirugnana Sambandar Guru puja is celebrated on the Vaikasi Moola Star day in May-June.

Young women awaiting marriage and women separated from their husbands due to some problems and those seeking pardon for wrongs committed unknowingly pray here for respective solutions.

The nearest airport is Chennai Meenambakkam.

The nearest railway station is Thambaram.

Mel Padappai is 13 km far from Chennai Tambaram. The temple is close to the bus stop.