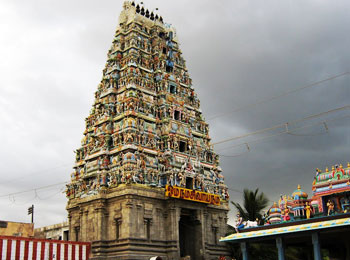 The Thanthondreeswarar Temple is located in Belur and is dedicated to God Thanthondreeswarar. This temple was built in the 12th century. The presiding deity of this temple is God Thanthondreeswarar and Goddess Dharmasamvarthini. The temple is located on the banks of the Vasishta river. The story behind the inception of the temple involves a pepper merchant called Manickam Chetty who was crossing this region on his way to the market. He decided to rest in the spot when darkness set it. While preparing dinner, he crushed a vegetable against a rock. He suddenly heard a voice saying "the stone is hurting my head, please apply pepper on my head". The merchant said that he didn't have pepper and that he only had black gram. The next day when he opened his bag in the market, he saw the bag was filled with black gram instead of pepper. He prayed to God and asked for pardon. God asked him to take mud from the spot where he had crushed the vegetable and sprinkle the mud in the bag. The merchant did so and the black gram turned into pepper again. When he examined the spot, he found a Swayambulingam. He prayed to the God and built the inner sanctum of the temple. He was then known as Milagu Chetty and the area where the pepper transformed is called Ulundurpettai. The rest of the temple was constructed by king Paranthaga Chola.