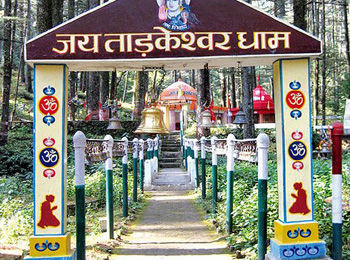 The Tarkeshwar Mahadev Temple is located in the Pauri Garhwal district of Uttarakhand, which is a State in Northern India. The temple lies at a distance of 36 Kms from the Lansdowne cantonment town. The place is located at a elevation of 1800 meters above the sea level. The temple is primarily dedicated to Lord Shiva. The temple area is surrounded by dense forests with cedar, blue pine, chir and oak trees. Huge fair is held in the temple, twice in a year, once during Mahashivaratri and the other in the month of June.

Lord Shiva of Tarkeshwar Mahadev is the chief deity of the Garhwal rifles (Lansdowne cantonment), as well as many other villages located around this sacred shrine. According to Legends, Goddess Parvati (wife of Lord Shiva) is said to have prayed hard to Lord Shiva to get him as her husband. Located at the foot of the majestic Himalayan Range, the temple is set around a picturesque and serene location. The temple lies at a distance of merely 5 Kms from the boundaries of the popular Jim Corbett National Park.

Tarkeshwar Dham is one among the Siddh Peeths and is considered a sacred site. The place is ideal for meditation and houses a meditation centre within its premise. There are open pools for bathing, before entering the temple. Besides, separate closed pools are available for the ladies. There is a kund within the temple compound which is believed to have been dug by Goddess Laxmi. The holy water from the kund is used for offering abhisheks to the Shivlinga inside the temple. Bells are offered by the devotees to Lord Shiva after every auspicious occasion in their family, such as a wedding or the birth of a new born child. These bells are hung in a separate room within the temple. When the room becomes full with bell, they are hung at the walkway.

According to Hindu Mythology, Goddess Parvati is said to have transformed herself into 7 deodar trees, in order to provide shade to Lord Shiva. This has been attributed to the reason behind the presence of numerous deodar trees of the region. The shape of the deodar grove is believed to be in the symbol ‘Aum’ originating from the ancient language Sanskrit . This is also one of the reasons behind the name Tarkeshwar that is bestowed to this temple. The shivling in the temple is placed under the idol of the deity. A separate shrine dedicated to Goddess Shakti lies adjacent to the main temple. The ‘Havan Kund’ is located within the temple premises, for the performance of special prayers by the pilgrims. Farmers from the nearby villages offer their first harvest to this deity as a mark of respect.

How to Reach Pauri Garhwal

The Jolly Grant Airport at Dehradun is located at a distance of 133kms from Pauri Garhwal, is the nearest airbase. The airport operates flights to Delhi on daily basis. Taxis can be hired from outside the airport to reach the temple.