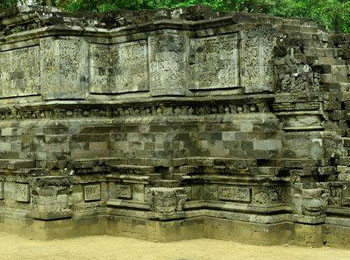 Surowono is a Hindu temple, of the Majapahit Kingdom, located in the Canggu village of the Kediri near Pare district in East Java, Indonesia. It was believed to have been built in 1390 AD as a memorial to Vijayarajasa, the Prince of Wengker. As of today the temple is not fully intact.

Surowono temple is a moderately sized west facing temple just like most East Javanese temples. Surowono is adorned with many different reliefs, and many of them extend around the whole building. Everything depicted in the reliefs have to do with the direction. The surface of the temple is decorated with many reliefs. On the base of the structure are eighteen horizontal plaques, night vertical panels, and in the middle was a plain band, which was the midsection of the temple.

Surowono temple was built in 1390 but was not completed until 1400. Some believe that this did not start out as a monument to Vijayarajasa, but just a structure that he commissioned. The shraddha ceremony, which is a funeral ceremony, was held in 1400. This is why some speculate the actual completion date. Not much is known about the history or how it came to become dismantled. Today it stands in the small village of Canggu, in the Kediri district right out of Pare. As of right now specialists are trying to reconstruct the base to its original state

Surabaya's Juanda Airport is the nearest.

Surabaya is connected by rail from Jakarta.

All of the major cities and towns in Java can be reached by bus.