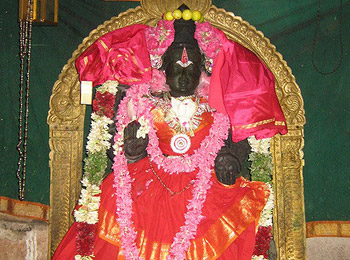 Sundara Mahalakshmi Sametha Kamala Varatharaja Perumal Temple is dedicated to Lord Vishnu located at Arasar Koil Village in Kanchipuram District of Tamilnadu. This temple is located at Arasar koil about 1.5 km from the Vyagrapureeswarar temple. It is said to be older than the Kancheepuram Varadaraja temple. 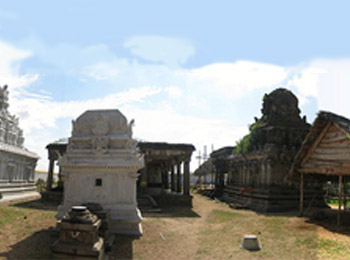 Sundara Mahalakshmi Temple the ancient temple of Sundara Mahalakshmi is said to represent the mother of all the 64 forms of the Goddess Lakshmi and each form represents wealth; wellbeing and treasures. The temple is edged with Aishwarya Shakti, Shukra Shakti and Kubera Shakti. Sundara Mahalakshmi has 6 toes on the right leg Six is Shukra’s number, hence it is believed that Mahalakshmi rules Shukra’s power to bestow prosperity.The temple of Sundara Mahalakshmi also has a shrine of Perumal. Next to the main shrine is the Gayathri vastu Mandapam hall which consists of 24 Gayathri Beejakshara Shakti pillars. The shrine of Thayar appears as a separate temple which is consist of small but beautiful Mandapam. The shrine has musical pillars which are made of echoing stones. It produces musical notes when tapped. The images of Vishvaksena, Sri Vedanta Desika and Sri Manavala Mamuni can be seen in this temple.

The temple entrance is known as Shree Purandhan vassal doorway. The main shrine as well as temple faces west. A huge Mandapam can be seen in the front of the main sanctum. The temple walls are engraved with messages and writings. All the inscriptions are dated to the Chola times. The temple is also an ideal place to worship navgrahas. Each of the nine lords represents the navgrahas and their consorts worshiped Shri Sundara Mahalakshmi at this temple.There are many temples dedicated to God Varadaraja situated near the Palar. The best among them is the Sri Vardaraja Swami Temple in Kanchipuram. 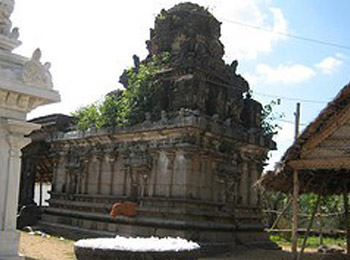 The main deity is Sri Kamala Varadharaja Perumal who is believed to be a saligramma. The Kamala Varadaraja Perumal idol is in the standing posture with four arms. His upper arms hold the conch and the discus while lower right hand holds a lotus and lower left hand has a mace. The Goddess Sundara MahaLakshmi is seen in the seated Padmasana Lotus posture with both hands in abhaya hastham. 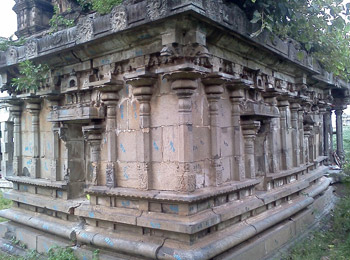 The inscriptions are dated to the Chola times of the 13th century A.D. This quotation, dated 24th August 1237 A.D., which belongs to the time period of Rajaraja Chola 3 (1216 to 1250 A.D.), is engraved on the north, west and south walls of the main place of worship. There is another quotation of the Chola times etched on the north wall of this main place of worship states that three cows and calves were gifted by an individual as a twilight lamp to the deity Tiruvarasur Emberuman. The great Pandiyan emperor is remembered for all his bounteous donations to the Sri Ranganatha Swami temple in Srirangam found in a long quotation there. The other Pandiyan quotation is of the Sundara Pandyan 2 time period dated 18th August 1291 A.D. and records the sale of land to this temple. There are also several quotations of the Vijayanagara times. Shukra worshipped at this temple on every Friday. There are few popular legends based on this temple such as, God Brahma performed penance under the peepal tree and prayed to God Narayana to appear before him. God Perumal appeared before him with his consorts Bhu Devi and Sri Devi. According to another legend, once God Brahma collected earth from River Palar to make an altar to sacrifice at Kanchipuram the images of Kamala Varadaraja Perumal and his consorts were uncovered, and he kept them in this temple and worshiped them. 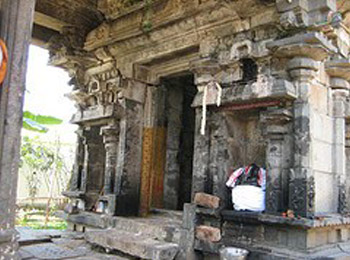 A special puja is organized in the temple during the the days of Varalakshmi Vrata and on every Friday.

Especially the Fridays during Shukra Hora and during the Tamil month of Aadi and Thai has a significant importance. It is the auspicious time to pay tribute to the goddess.