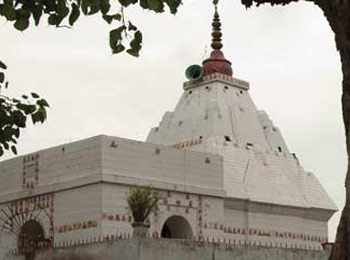 The ancient temple (belonging to the) Dwapara Yuga is the Handi Surya Mandir. temple has many ancient idols many of which are damaged with time among which the main deity is that of Surya Narayana. The temple lies in the Nardiganj block of Nawada district(6 kms south-west of Rajgeer). A dip in the holy pond completes ones worship.

The sanctum is being renovated and lays 7-8 feet below the ground level. Ma Bhagwati resides here is two forms made in black stone. During the reign of Jarasandha, Bhagwati was worshipped every tuesday. Dhaniya first worshiped Surya Narayana and then moved to Dhaniya hill to worship Gauri- Shankara. Surya Narayana's statue (black stone), sits on a chariot with seven horses along with a asmall Shivalinga. The main statue was replaced by a small marble statue which was established after certain necessary religious ceremonies.

Post the recent renovation of the main building there are three brass kalash on the dome along with a Surya chakra. The temple holds Havana Kunda and Havana is done by the priests every Sunday. The priests here are responsible for the administration.

King Jarasandha's daughter Dhaniya was suffering from leprosy and used to visit this temple daily for worship. She was cured by taking a bath in the holy pond post which she established a temple dedicated to Ma Bhagwati and a unique Shivalinga depicting Gauri and Shankara simultaneously at Dhaniya hill( 2km from the main temple)

Thousands of leprosy infected people visit the shrine on Sundays and take a dip in the holy pond and worship in the temple after which they go back to the pond and offer the holy water to the deity. Devotees take the holy ash (Bhabhoota) as prasad and a medicine (rubbing it on the skin cures leprosy)

How To Reach Nawada

Nearest airport is at Gaya.

Nawada railway station is well connected to other parts of the country including the major cities.

Uttarakhand and other major cities have regular busses for Nawada .