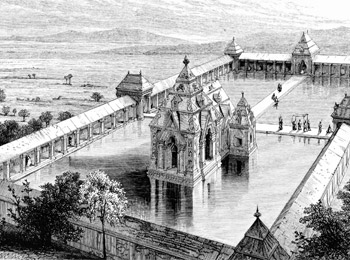 The Multan Sun Temple,is an anciet sun god temple, also known as the Aditya Sun Temple, dedicated to Surya also called Aditya, which was located in the city of Multan, now in Punjab,( Panjab) Pakistan. The city of Multan got its name from the Sanskrit name for the Sun idol and Sun temple, Mulasthana.

The original Sun Temple at Multan is said to have been built by Samba, son of Krishna, to gain relief from the symptoms of his leprosy more than 5000 years ago. Samba, the son of Krishna and Jambavati (daughter of Jambavantha), was sent to exile to get treated for his leprosy, which he got due to a curse after an incest act. 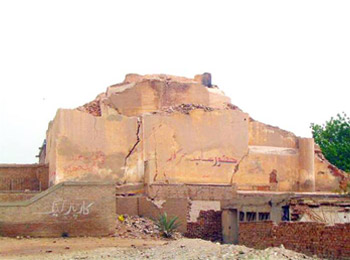 The Bhavishya Purana, Skanda Purana and Varaha Purana report that some of Krishna’s junior wives were infatuated with handsome Samba. One wife Nandini disguised herself as Samba’s wife and embraced him. For this act of incest, Krishna cursed Samba to be inflicted with leprosy and his wives to be kidnapped by Abhira robbers after his death.

The Samba Purana consists the narrative of Samba’s getting infected by leprosy, after being cursed by his father and consequently getting cured by worshipping Surya in the temple constructed by him in Mitravana on the banks of the Chandrabhaga. He was advised by the sage, Kataka, to worship the sun god to cure his aliment. Samba underwent penance for 12 years in Mitravana near the shores of Chandrabhaga, which is situated 3 km east of the Sun temple of Konark, and 30 km from Puri. Until recent years Chandrabhaga was considered a place of natural cure for lepers.Both the original Konark Sun Temple and the Multan Sun Temple at Multan, earlier known as Kashyapapura, have been attributed to Samba. 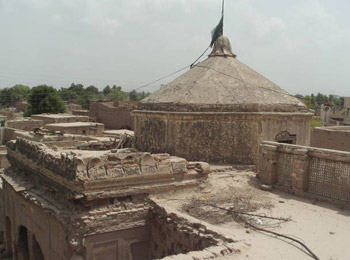 Hsuen Tsang is said to have visited the temple in 641 AD, and described an idol of the Sun God made of pure gold with eyes made from large red rubies.

Gold, silver and gems were abundantly used in its doors, pillars and shikhara. Thousands of Hindus regularly went to Multan to worship the Sun God. Hsuen Tsang is also said to have seen several devadasis (“dancing girls“) in the temple.

Travelers like Hsuen Tsang, Istakhari and others, mentioned other idols in their travel program, saying that that the idols of Shiva and Buddha were also installed in the temple.

After the conquest of Multan by the Umayyad Caliphate in the 8th century AD, under the leadership of Muhammad bin Qasim, the Sun Temple became a source of great income for the Muslim government. Muhammad bin Qasim ‘made captive of the custodians of the budd, numbering 6000‘and looted its wealth, sparing the idol — which was made of wood, covered with red leather and two red rubies for its eyes and wearing a gem-studded gold crown — ‘thinking it best to leave the idol where it was, but hanging a piece of cow’s flesh on its neck by way of mockery‘.

Muhammd bin Qasim built a mosque close to the temple, the most crowded place in the centre of the bazaar. Later, the temple was also used a bargaining chip to blackmail any Hindu kings heading towards Multan. Whenever a Hindu king was about to invade, the Muslim ruler would threaten to destroy the idol, which apparently made the Hindu king withdraw.

Al-Baruni visited Multan in the 10th Century AD and left a glowing description of it; however, the temple is said to have been finally destroyed by Mahmud of Ghazni in 1026 AD. Al-Baruni wrote that the temple in Multan was never visited by Hindu pilgrims in the 11th century because it was completely destroyed by that time and never rebuilt. 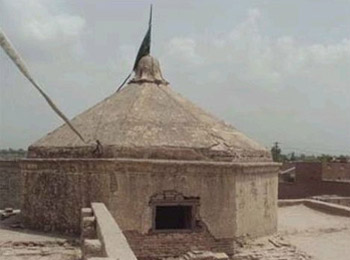 Both Lahore and Islamabad have direct flights to numerous international destinations across Asia, the Greater Middle East and Europe. There are buses/train between Delhi and Lahore. From Kashi China one can travel by road via the Karakoram Highway up to Gilgit for about 50$ and from Gilgit there are direct buses to Islamabad for about 5$ but it is a 17 hour journey on harrowingly winding roads.

Lahore Islamabad and Sialkot are the main gateways to Outside Punjab by air. However, there are 134 airfields in Pakistan.

Benazir Bhutto International Airport is currently in review to be expanded and modernized to meet the needs of the future passenger numbers, as demand for air travel has increased dramatically. There are many airlines operating into Islamabad including many of the above with Ariana Afghan Airlines, British Airways and China Southern Airlines. The only problem is that the airport is also used by government officials as well as arrivals from foreign diplomats so the airport may shut down as security is increased, so flights may be delayed.

Punjab has train links with its neighbor, the Republic of India to the east. The Samjhauta Express is the more common, running on Tuesdays and Fridays between Delhi and Lahore via the Attari/Wagah border crossing. Tourists should be aware that after recent terrorist attacks on the train, which caused many casualties and strained relationships between the two neighbors, it is strongly advised that you take taxis or buses to and from the border instead.

From ancient times people have been travelling through Punjab using the Grand Trunk Road that runs through Pakistan and into the Indian subcontinent. It is a rewarding but time consuming way to see this part of the world. New highways have been developed and the country is due for an expansion in its highway network. Currently, a world-class motorway connects the cities of Lahore, Islamabad and Faisalabad.

Punjab is connected to China through the Karakoram Highway, a modern feat of engineering that traverses a remarkably scenic route through the Karakoram and Himalayan mountains. It is about to be expanded from the current 10m wide to 30m because of the increase in trade traffic due to the Gwader port opening.

From India: While there is international service running to Lahore from Delhi it is just as fast, much more flexible, and much cheaper to take the journey by stringing together local transport and crossing the Wagah border on foot.

From China: While there is international service running to Islamabad from Kashgar it is just as fast, much more flexible, and much cheaper to take the journey by stringing together local transport and crossing the border on foot.