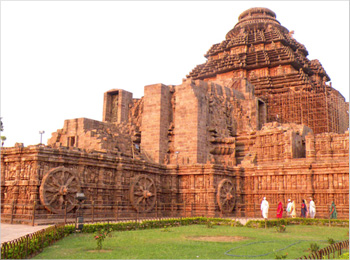 A temple dedicated to the Hindu Sun-God, Surya is located at at Modhera in the state of Gujarat. It is located on the bank of the river Pushpavati, at a distance of 25 km from Mehsana and about 102 km from the city of Ahmedabad. It was constructed in the year 1026 AD by King Bhimdev of the Solanki dynasty. In the recent past, prayers are not being offered in this temple. This temple is now under the supervision of Archaeological Survey of India.The Sun Temple is attraction of Modhera and it is famous for it's unique architecture. The temple has visitors from all over the world. Way back during the reign of Allauddin Khilji, the temple was partially destroyed. But what ever architecture that remains attracts lots of travellers every year. 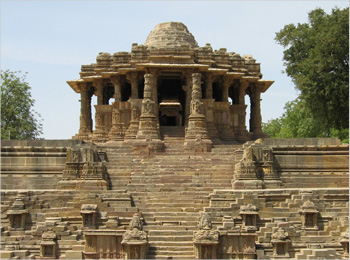 The temple was built by King Bhimdev of the Solanki dynasty (believed to be the descendants of the lineage of Sun God) in 1026. This ancient temple reminds one of Sun Temple at Konark in Orissa. Ancient scriptures like Skanda Purana and Brahma Purana has a mention of Modhera. The area around Modhera used to be known as Dharmaranya - forest of righteousness, and it is believed thatt the place was blessed by Lord Rama. 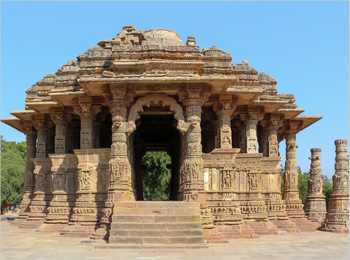 The Sun Temple is divided into three parts namely Surya Kund, Sabha Mandap and Guda Mandap. The wonderful architecture of the temple is in a class of its own. The temple includes three dis similar yet axially-aligned and cohesive elements. Similar to the Konark Temple, this abode is planned and designed in such a way that the first rays of the Sun fall on the idol of Lord Surya. Even after being plundered during the Muslim Invasion, the architectural grandeur has not yet vanished. The remnants provide a great delight to behold.

Erected on a raised structure, the Temple appears grandiose with its grand edifice. Even though the spires are not there anymore, the 'Toranas' (Archways) leading to the main halls outshine and compensate for the absence of spires or shikhars. The outside walls are carved with complicated carvings, highlighting the skills of art in that period. Every inch of the edifice is covered with the sculptural patterns of deities, birds, beasts and flowers. 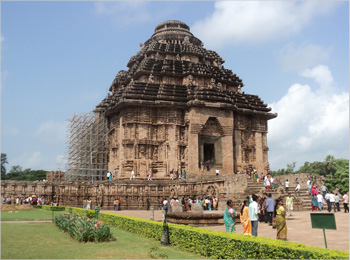 Surya Kund is a deep tank with steps in the front of the temple. The tank was named after Lord Surya (Sun God). In the past, this 100 sq meter rectangular tank was used as a storage facility for pure water. The devotees, before moving towards the temple, used perform ritual cleansings, in this tank. Not less than 108 altars mark the steps of this tank that include the shrines of Lord Ganesha, Lord Shiva, Sheetala Mata and many others. A huge 'torana' (archway) leads to the Sabha Mandap, in front of this tank. 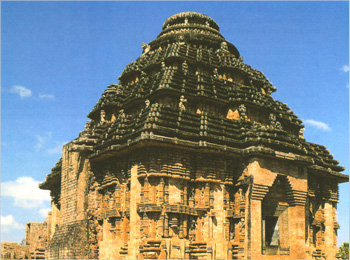 The Sabha Mandap is the place where religious congregations and discussions are conducted. One can enter this hall from all the four sides. The hall includes 52 dexterously engraved columns. The classy carvings depict scenes from the Ramayana, Mahabharata (Indian Epics) and scenes from the life of Lord Krishna (The Bagavatha Purana). One has to cross the passage with pillars and arches in order to reach the Sanctum Sanctorum,.

Guda Mandap initially the sanctum sanctorum that used to house the idol of the Sun God is supported by a lotus-base plinth. The design of the hall has been conceived in such a way, that the idol gets the first sight of the Sun at equinoxes. While the idol was destroyed by Mahmud Ghazni, the walls has the representation of the Sun God in his 12 different aspects for each month. The engraved walls also portray the phases of human life like the vicious circle of birth and death. The frontage of this hall was restored in the recent years, even though the fact that the roof over the Guda Mandap had already been destroyed.

While the regions of Patan and Mehsana are best reminisced for the historic descent of the Solanki dynasty, the place surrounding Modhera traces its roots to ancient times. IN the puranas this place is referred to as ‘Modherak’ or ‘Moherak’ signifying mounds of the dead, and the locality has seen layers upon layers of settlements. In the Jain Manuscripts this place is referred to as ‘Bhagvad Gram’. The Brahmapurana and the Skandapurana, mentions the legendary land of ‘Dharmavanyakshetra’ or “land of righteousness” to the area surrounding Modhera.

According to the Legend after routing Ravana in battle, Lord Rama and Sita stopped here on their way back. After due discussions with sage Vashishtha, Lord Rama decided to perform a yagna here to cleanse himself of the brahmahati dosha (the sin of killing a Brahmin, namely Ravana) who was a Shaivite and one of Shiva’s most outstanding followers. This yagna was conducted by a local Brahmin belonging to the Modh community from which the name Modhera is said to have originated. There is also a temple of Modheshwari, a manifestation of the mother goddess close by.

Modhera dance festival is the popular festival that is celebrated in the Sun Temple. This dance festival is regularly held to keep the Indian customs and ethos alive. It takes place during the third week of January every year. The traditional dance forms in the premises of this temple resuscitate the royal ambiance during the event. This event is organized by Gujarat Tourism to promote tourism at this place.

The sun temple at Modhera which by the way is the only temple to have a ‘kund’ or ceremonial tank seamlessly uniting with the main complex, thus emphasizing the contrast of the elements of fire and water.

The ‘Silavats’ were image or idol makers with an verbal tradition of temple engineering. The temple complex is a work of marvel in planning engineering, mirroring their principles of ‘vaastu shastra’ and astrophysics. Workmen created marvels of flora and fauna, creatures of fantasy, panels of narrative art depicting myth and legends and graphical impressions of geometrical shapes, supervised by seniors.

The temple is a typical example of the physical aspect of Solanki architecture, namely a mastery over the stylishly sophisticated carving of stone and the prudent use of lime mortar. Entrenched in a rolling landscape of green foliage, the design component of the temple observes the tenets of Vastu - Shilpa. The kund and the entrance pathway face east is an aura of welcome to the inviting rays of the sun, and the entire construction floats on a plinth reminiscent of a flowering lotus as an ablution to the sun god. The design specs of the steps are a schematic mirror image of the temple ‘shikhar’, thus symbolically linking fire and water, dream and reality. The main temple is divided into three parts, the entrance which is the ‘Sabha Mandap’, ‘Antaral’ the linking passageway and the ‘Garbagruha’, the sanctum sanctorum.

Nearest Airport is at Ahmedabad 102 kms. Away.

The nearest railway station is located at Mehsana which is about 40 kms.

Distance from Ahmedabad to Modhera is 101 km and it takes around 1.45 hours. From Mehsana it is 26 km.