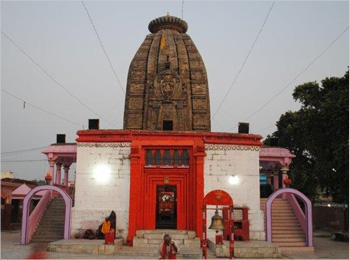 The Sun Temple at Aurangabad in Bihar is unique as it faces west and it is located at Deo or Dev around twenty two km from Aurangabad. The presiding deity here is known as the Thrikal Surya – the forms of Brahma, Shiva and Vishnu. The Brahma depicts the rising sun, The Shiva the mid-day sun and The Vishnu represents the setting sun.

The structure of the temple follows the Nagar style of architecture prevalent in North India and is simple.

According to legend, originally the temple faced east. At the invasion of Kala Pahar, he attempted to destroy it. But, the priests stopped him by saying that misfortune would befall him, if the temple was destroyed. Kala Pahar then challenged the priests that the temple should turn west if it was so miraculous. Next sunrise, the temple had miraculously turned facing west. The present shrine was constructed between 8th and 12th century AD.

The most important festival is the Chhath Puja in November-December and also in March-April. Ardra Nakahstra and Sundays attract maximum devotees.

Aurangabad airport is the nearest airport.

Aurangabad has a good connectivity of roads and highways.