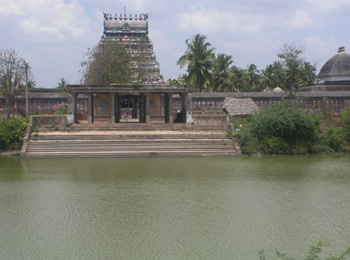 The Maapillai Swami Temple is located in Thiruvezhimizhalai and is dedicated to Maapillai Swami. Here, the God is seen with a flower bouquet in his hand and a bamboo in the other. Maappilai Swami is portrayed with Ambal to his right. God Shiva is depicted in two ways at the same Kshetra. At the moolasthanam, Balambikai is seen to the left to the God behind the Lingam. At the prakara, Thyagaraja and Kamalambikai are seen in the same peedam. In between, one can witness Maha Vishnu with Lakshmi and Dakshinamoorthy, installed in the next. He is portrayed in a sitting posture with his right leg placed on a lotus, but unlike the other temples, there's no banyan tree behind him. In general, every Shivasthala has Nandi and kodimaram, in front of the deity. But here, the Lingam faces moolasthanam. The mandapam facing Shiva Sannadhi is designed as the wedding dais. The belief is that after praying to Maappilai Swami, if we go around the pandakkal, the marriage will be settled soon.

This special idol of swami and ambal is known as “mappilai swamy”. (Swami in bridal form). Swami and ambal were seen in this idol as newly married couples. This temple is also known as “Marriage Sthala”. Idols of Murugan, Ganapathi, Chandikeshwarar, Kala Bhairava and different types of lingams are located in the prakara.

Parvati is said to have been reborn as Katyayani and married Shiva here. Vishnu received Chakrayudam from Shiva here in lieu of the 1000 flower worship to Shiva. Once due to the reduction of a lotus flower in the count, Vishnu plucked one of his eyes and performed archana considering it as lotus flower. A panel depicting the divine marriage is seen behind the Shivalingam. The Moolavar vimanam is believed to be brought to here by Mahavishnu. When Appar and Sambandar visit this place, there was a severe drought all around. They prayed to Lord Shiva who gave Padikasu (Gold Coin) one each every day to both of them. Sambandar gets Padikasu at the Pedam in front of Mahamandapam. Navukarasar gets gold coin in the Pedam in Merkku (west) Pragaram. Using these gold coins, they offered food to the needy people. (In that sambandar got gold coins of more value and appar got coins of bit less value it seems).

It is well connected by road and railway, and the nearest airport is in Trichy.