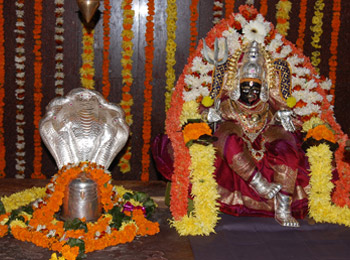 On the banks of River Gauthami, a branch of River Godavari, flanked by striking farms, wide spread paddy fields, cattle grazing and ploughing the lush fields surrounded by coconut gardens stands proud, the Sri Bhadrakali Sametha Sri Veerabhadra Swamy Temple of Muramalla. It is believed that devotees who still haven't got married, who find it difficult to get good proposals, get married with just a mere visit to this temple. Not only that, childless couples, and couples who do not get along will find respite here. 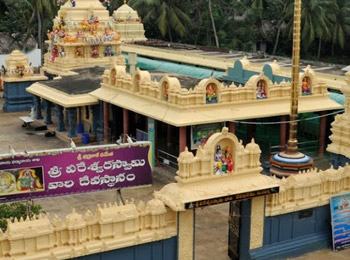 Then they both got married in the way of GANDARVA VIVAHAM. All the Maha Munis have erected Ashramas called Muni Mandali which was turned in the name of MURAMALLA after many years. From then onwards, all the Maha Munis are performing Gandarva Vivaham to Lord Veerabhadra Swamy in the disguise of Nitya Kalyanam, Which is continuing till today.

The Nitya Kalyanam of Sri Veerabhadra Swamy will be witnessed not only by the devotees but it is in vogue that Munis like Agastya, Sukudu, Viswamitra, Vasista, Gowtama, Bhargava, Vyasa, Bharadwaj, Marichidu, kasyapudu, Markendeyudu and Narada will also witness this Kalyanam.

The celebrations of this event are held for five days. There are events associated with the marriage of Veerabhadra Swamy and Bhadrakali and poojas (prayers) that are held through these days in the temple. Sri Swamyvaari Nithyakalayana is held on Vakshagaamu Vaisakasuddha Panchami day.

Post the event of Mahashivaratri, Laksha Rudhraksha Archana is done for Veerabhadra Swamy. Devotees join in the poojas and ceremonies involved in this event.

At the time of Shivaratri, in Andhra Pradesh, the event of Pushkaraalu takes place. This means that the water of 12 great rivers such as the Ganga, Narmada, Saraswati, Yamuna, Godavari, Krishna, Kaveri etc are taken and a ritual known as the abhishek is performed in the temple.

Nitya Kalyanam Pooja takes place every day in the temple at 7 P.M. APSRTC has arranged bus facilities to nearby villages for devotees after completion of pooja.

It doesn't have many options regarding stays except for 4 rooms. So, the best option would be to stay in either Amalapuram or Kakinada or Rajahmundry.

Muramalla is situated in between National Highway 214 from Kathipudi- Pamarru. Direct Buses are available from Kakinada, Yanam or Amalapuram.