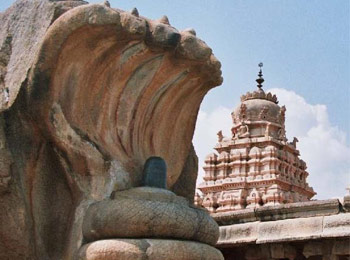 
Sri Veerabhadra Moorthy Temple is dedicated to Lord Sri Veerabhadra and is located on the Kurma Shila Hill at Lepakshi. Lepakshi is situated at 110 kilometres from district centre of Anantapur, Karnataka.Lepakshi is a group of temples that were built in 16th Century AD, on a single granite rock that is shaped like the back of a tortoise. The hill was called Kurma-shila, or the tortoise hill. 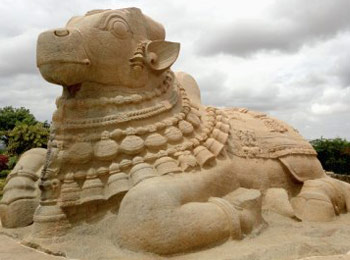 The temple is famous for the seven-hooded coiled serpent that has been carved out of a single stone and the Panchalingas. The Panchalingas are the five main lingas in the Lepakshi temple complex, comprising the Papanaseswara linga of Sage Agastya, the Rama linga, the Nagalinga (17ft high) and the linga consecrated by Hanuman and the Tandaveshwara( Veera bhadra Moorthy) consecrated by Virupanna. The Natyamandapa or dance hall is supported by 100 pillars finely sculpted with figurines of a dancing Siva, Nandi, Tumbura, Rambha and other celestial beings playing the drum, veena and other instruments in accompaniment. The unfinished Kalyanamandapa on the other side contains sculptures of dikapalakas on the pillar. In the centre of the mantapa there is a dome that is about twenty-one feet in height, and is like a great lotus from heaven. The ceiling of the mantapa is divided into different panels by beams that are painted with some of the most exquisite murals of the Deccan. By worshipping the idol, legend has it that devotees will be blessed with progress in all fields of life. Owing to the efforts of Lord Shiva in a war, devotees facing trouble in their lives are expected to worship Veerabhathra Moorthy for a suitable remedy. 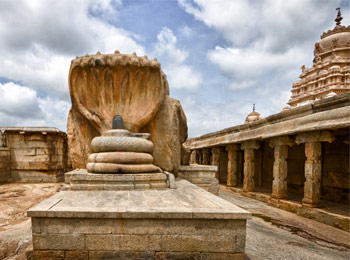 The entire temple and the structures within are of typical Vijayanagar style of architecture, with intricately and beautifully carved granite sculptures and structures, with “shikharas”, meaning peaks (some of them shaped like a dome) made of brick decorating the top of these structures. These brick domes are now restored by concrete, but the restoration seems incomplete in some places as the damaged images without hands or heads remain as it is, even after restoration. However, as it now has concrete, the bricks will fare better in rough weather. On visiting Lepakshi, one will surely remember the great ruins at Hampi, in Karnataka, if one has seen it before. (At the ruins of Hampi, one can still see the deteriorating reddish brick domes on the top.) 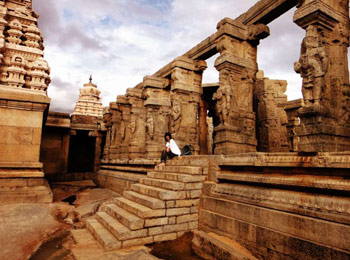 Legend has it that Dhakshan, the father of Umadevi performed a grand yagna. Although Dhakshan was Lord Shiva’s father, he refused to invite Shiva to participate in the yagna. Uma Devi, Shiva’s wife, attended the yagna. While there, she was disrespected by her father, during the yagna. She committed suicide at that yagna-sthala. When Shiva came to know of this, he went to his father-in-law’s place as Veerabhadra, and killed him by cutting off his head. With his superpowers, Shiva got his wife to come back to life. The other deities prayed to Lord Shiva to give Dhakshan back his life, since he was his father-in-law. All the deities wanted the yagna to be completed. Lord Shiva then placed a goat’s head on Dhakshan’s body and gave him life. Sri Virupanna, who worked as the Treasury Officer at the Penukonda Fort in the Vijayanagara Empire, took up the construction of the Lord Veerabhadhra Temple at Lepakshi in the 16th Century. 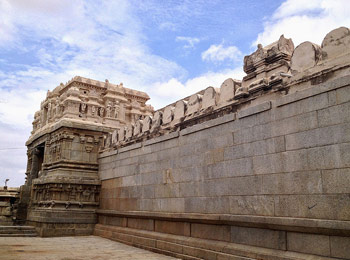 There aren’t any good places for food within Lepakshi, nor any accomodations. Hindupur is the nearest town with good hotels. The best option is, if you are visiting Bangalore, then better plan for a day trip from there itself. You can leave early morning, and then return back by evening.


From Bangalore there are two ways to reach Lekapshi, One is via Hindupur and other through Hyderabad highway.

via Hindupur: Head to Hindupur straight. From there take a diversion towards Kodikonda.Its just 15 Km from here.

via Chikballapur : Head towards Hyderabad till Kodikonda ( AP Border ) and then turn left and from their Lepakshi is just 16 KM.

KSRTC buses run so frequently between Bangalore and Hindupur.


The nearest Rail head is at Hindupur.