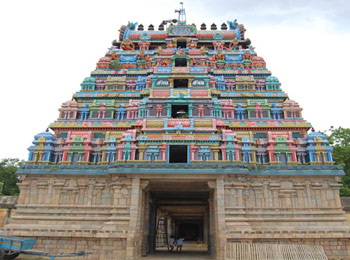 The temple is located 15 kms to the North of Tiruvarur off the Kumbakonam-Nannilam Highway between Mudikondan and Puttar rivers is the ancient and huge Vanchinatha Swamy Temple in Sri Vanchiyam, a temple whose legend dates back to the Kretha Yugam and one that in its current form and architecture dates back to the Chozha period. The entire temple complex has a strong granite structure signifying the Chozha construction. 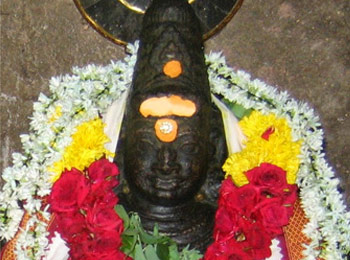 Srivanchiyam is a small Village in Tiruvarur district of Tamil Nadu, between Mudikondan and Puttar rivers. The presiding deity here is Vanchinathan and His consort is Mangalambika. The Shivalingam is a Swayambhu and faces both West and East; hence puja is performed here in both the directions.  The temple has two Nandhis in this temple, one on the East and one on the West. The Shivalingam here is considered the oldest among the 64 swayambhu lingams in the world. This lingam is supposed to have existed even before the pralaya (the Great Deluge) and was facing west when Suryan worshiped him. Sandalwood is the sthala vriksham here and sandal leaves are used to perform the puja to the Lord. Usually vilva leaves are used in puja for Shiva.

At the temple Eastern entrance is the 5 Tier 110 ft high Raja Gopuram one of the biggest in the region. The huge 5acre complex houses three big prakaras with 4  Mada Streets around the temple complex. Raja Raja Chozha contributed in a big to the improvement of the temple. During his period, the temple as well as the whole town was prosperous with happiness all around among the residents. Raja Kesari Varma and Sadayavarma Sundarapandyan donated lands in big measure to the temple. The dakshinamurthy idol dates back to the 10th Century AD with Kulothunga I raising the wall of the Sannidhi. The Subramanya idol belongs to the Nayak period and 15th-16th Century AD. The Ashtabhuja Durga idol goes back to the Kulothunga III period when the temple also saw renovation. Later in the 2nd half of the 16th century, Chellappa Nayak directed a part of the taxed income to be handed over to the temple for the conduct of daily poojas and annual festivals. 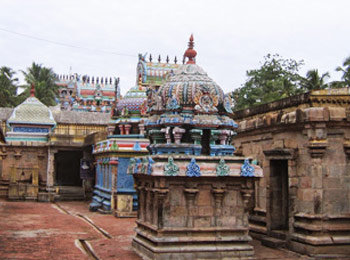 Vanchinathaswamy is the main deity of this Srivanchiyam temple. The goddess is called mangalambikai. Here is a separate temple to Lord Yama. Lord Yama is the Guardian of this temple (Kshethrabalagar). In this temple, there is a separate temple for Yama the Lord of Death on the left side of the entrance. Shrines for Lord Vinayaka and Subramania (Muruga) are in the first Mandap. Lord Vinayaka in the temple is praised as Abayankara Vinayaka. Passing the inner entrance, we have the shrine of Mother Mangala Nayaki in Her standing posture. There is Vennai Pillayar in a pillar in the first praharam (circumambulatory path). People smear butter on His stomach to get cured of their stomach ailments. The Thevaram hymns related to the temple are carved on a marble stone fixed on the wall. Sri Adhikara Nandhi is on the left side. The procession deities are kept safe in a mandap. Presiding deity is a little fatter and tall. There are Vennai Pillayar, Muruga, Panchabhooda Lingas, Jeshtadevi and Sani Bhagawan shrines in the inner corridor-prakara. Since this is a very ancient temple and has been in existence before the advent of Navagraha worship, there is no shrine for the Navagrahas here. However, Saneeswarar has a separate niche. Goddess Mahalakshmi has a separate shrine and her elephant has four tusks. 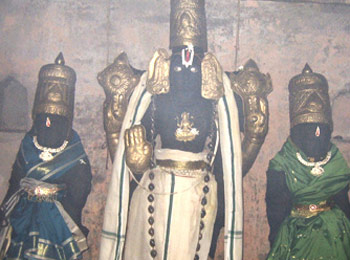 Yama the God of Death felt very sad that he was assigned the job of taking the life of people while there are many jobs of happy nature. He went to Tiruvarur and spoke his sorrow to Lord. Lord Shiva directed him to go to Sri Vanchiam and pray there. Yama performed penance. Pleased with his penance, Lord Vanchinadheswarar appeared before him on the Masi month Bharani Star day in February-March and asked what he wished.

Yama said that he had been assigned the job of taking the life of people thus incurring their hatred and harsh criticism and he was suffering the Brahmmahati dosha caused by his job duty. Lord Shiva assured him saying that in future, people would attribute the cause of death due to diseases, age and accidents and they would not blame him. Lord also instructed Yama that he should permit only those who are less sinners and they should not have rebirth. Lord also emphasized that Yama should make their end peaceful. He also granted him the status of Kshetra Palaka and the devotees would worship him first and then only at Lord’s shrine. Accordingly, the first puja is dedicated to Yama only in this temple each day.

A second story narrates the Sun God’s penance and liberation. The story goes that Brahmma’s son Dakshan refused to give his daughter in marriage to Shiva. Despite this, Dakshayini went ahead and married Shiva. Upset at this, Dakshan performed a Yagna inviting all but Shiva. Dakshayini protested against this decision but to no avail. Angered at her father’s decision to insult her husband, Dakshayini cursed all those present there for agreeing to participate in the yagna without the presence of Shiva and fell into the pyre. Shocked at this turn of event, Shiva sent Veerabadra to knock out all those who were present at the Yagna. He went there and hit out at the Sun God, who had his teeth broken. Repenting his wrongful participation in light of Dakshan’s intent to insult Shiva, Surya undertook a month long penance at the sacred tank in the month of Karthigai and liberated himself.

As a tradition, Theerthavari is performed only on the final day of Brahmmotsavam in Shiva temples. Here it is performed on the second day in the temple tank itself during the Masi Magam festivals in February-March. Lord Vanchinathaswami comes in procession on the Ema Vahan. On the final day, pujas are dedicated to Lord Muruga. Theerthavari is celebrated on Karthikai Sundays too in November-December. A 10 day festival is also celebrated following Aadi Pooram in July-August.

There is a Brahmin household in the Sannidhi Street that runs a mess. There is also a kalyana mandapam where you can stay. If you prefer a more comfortable accommodation, Tiruvarur is the nearest town.

In almost all temples, if there is an unfortunate event like a death, the pujas are not conducted. At Sri Vanchiyam it has no bearing on the conduct of daily pujas and rituals, they continue. During the eclipse times also, the doors of the temple is open though as a tradition in other Shiva temples they are closed. Special abishek is performed to Lord of Sri Vanchiam during this time.  It is still believed that Mother Ganga is residing at Guptha Ganga in this temple theertha secretly.

Historically, six places - Thiruvenkadu, Thiruvayaru, Thiru Mayuram (Mayiladuthurai), Thiru Vidaimarathur, Chaaya Vanam and Srivanchiyam - along the banks of Cauvery have been specified as sacred and comparable to visiting Kasi. Among these, Sri Vanchiyam counts as the most sacred. People come here to worship the god as he blesses them with extended lifetime. This is a Mukthikshetram (where you attain salvation).This temple is considered as “one-sixteenth” more sacred than Kasi. Lord siva is said have told parvathi. Devotees are cured of illnesses after a bath in the Gupta Ganga (sacred tank) on the northern side of the outer Prakara. According to Puranas, a holy dip is equivalent to one in Varanasi, Rameswaram and the Mahamaham Tank. A dip in the tank supposedly absolves you of all the sins and there is no rebirth.

Goddess Lakshmi and Lord Vishnu are believed to have prayed the Lord here to get united. Bhairavar is in a separate shrine in the inner praharam (circumambulatory path). He is in Yoga posture without his vahanam (Vehicle) - the dog. Pujas are performed to the Yoga Bhairavar using Vanni leaves. Consumption of the powder made from the vanni leaves used in the puja is believed to cure all nervous ailments. One can to get rid of all evils directed towards them if they perform puja to Yoga Bhairavar. The prayers of the childless are answered after they perform puja for 6 consecutive Krishnapaksha ashtami days (eighth day of the waning Moon). One can succeed in all his endeavours and business if he makes an offering of Curd Rice, Coconut rice and Honey on Amavasya days (New Moon days). This is also parihara sthalam (place for remedial worship) for the malefic effects of Rahu and Kethu. Rahu and Ketu appear in the same niche here. This is next to Yoga Bhairavar. Rahu Kala Puja on Sundays with offerings of vada made of lentils and ghee is believed to remove the obstacles in getting married. Like in Thirunageswaram, milk turns blue in colour during the rahukala abhishegam (ablution during rahukalam).

People’s whose star sign is Leo ( Simha Rashi ) have to visit Vaanchinathar Temple - Tiruvaanchiyam (Srivanchiyam) in Tamil Nadu twice in an year or atleast once in an year should stay in the temple or premises for two and half hours.Those born of Magam, Pooram, Sadayam and Bharani Stars and belonging to Aries (Mesha) and Aquarius (Kumba) Rasis or Lagna pray here for any adverse planetary problems faced by them. Also those who had lost jobs, aspiring promotions and transfers, separated couples for re-union pray here on Karthika Sundays after a bath in Gupta Ganga in November-December.

The nearest railway stations are located in Tiruvarur and Kumbakonam.

Srivanchiyam is 25 kms from Kumbakonam and one km from Achuthamangalam on the Kumbakonam Nagapattinam route. It is 16kms from Tiruvarur on Tiruvarur Nannilam route.