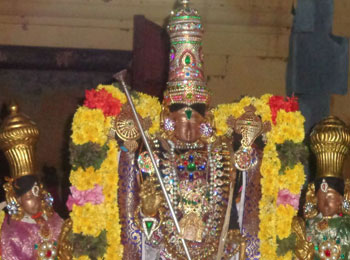 Sri Purushothama Perumal Temple,named as ‘Thiru Vaan Purushothamam‘ is situated in Thirunangur, Nagapatnam district of Tamilnadu, dedicated to Lord Vishnu and also one of the 108 Divya Desam Temples.This temple lies in Thirunaangur of Tanjore district in Tamil Nadu. It's about 5 miles away from Seerkazhi. Bus facilities are also available.Holy person Tirumangai Azhwar has portrayed Lord of the Temple as Lord Rama of Ayodhya in his Mangala Sasanam psalms, saying that advantages would collect not just to the one droning the eminence of Lord additionally to those listening the droning. The conviction is that issues of any unpredictable nature would be fathomed if one performs Vishnu Sahasranama archana for 48 days ceaselessly with no break and close the petition to God with unique archana and puja on the last day. 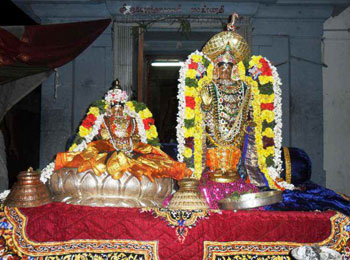 Of the 108 Divya Desas, this is the temple for which Lord Himself raised the store to fabricate this temple. Ruler favors aficionados confronting east. Perumal is lauded by numerous names as Semponnarangar, Herambar and Perarulalan. The Vimana over the sanctum is known as Kanaka Vimanam. He is Arulalan in His Paramapatha kingdom. As He is likewise with us for continually pouring his effortlessness, He is called Perarulalan-All Merciful. Mother Alli Mamalar Nachiar is gracing the devotees alongside Mother Bhoomadevi. A Brahmin, Kashyapa by name, living in Kancheepuram lost all his riches and was lessened to a poor person. He resulted in these present circumstances heavenly land, droned the 'Ohm Namo Narayanaya' mantra 32 thousand times inside of three days surrendering at Lord's feet. All Merciful Perumal favored him with all wealth. 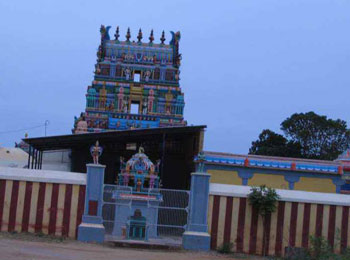 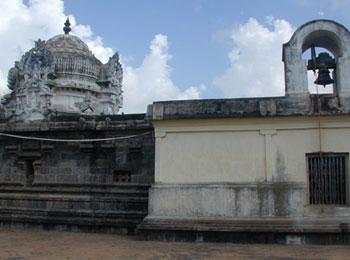 Sage Vyakrapada came to this temple with his child Upamanyu, placed him at the entrance of the temple and went to pick flowers for Lord. The child began to cry for food which fell in the ears of Lord reclining in the milk ocean. He immediately created a milk ocean in this place. Mother Purushothama Nayaki fed the child with the milk.

Thirumangai Azhwar Mangalasasana Utsavam and Garudasevai – January or February, Vaikasi Brahmmotsavam – May or June, 10 day Panguni Uthiram in March-April; Pavithra Utsav in Aavani Poornima day in August-September and Thai month Garuda Seva on the second day of Amavasya-new moon day are the festivals celebrated in the temple.

Devotees pray to Perumazl for removal of delays and obstacles in marriage matters, for child boon and for achieving excellence in education. Devotees perform Tirumanjanam to Perumal with vastras.

The temple is one among the 108 Divya Desas of Lord Vishnu. Devotees pray to Perumal for removal of delays and obstacles in marriage matters, for child boon and for achieving excellence in education. The day after every Thai Amavasai, Garuda Sevai is celebrated excellently here.

The temple lies on the Sirkali-Nagapattinam Road. The devotee has to get down at Annan Koil bus stop. The temple is 2 km east. Also frequent bus facility is available to the temple from Sirkali.

The nearest railway station is in Sirkali.