Tiruchirappalli, situated on the banks of the river Cauvery is the fourth largest city in Tamil Nadu. It was a citadel of the early Cholas which later fell to the Pallavas. Trichy is a fine blend of tradition and modernity built around the Rock Fort. Apart from the Fort, there are several Churches, Colleges and Missions dating back to the 1760s. The town and its fort, now in Trichy were built by the Nayaks of Madurai. This city has given great Tamil scholars whose contributions to the Tamil literature have been very significant. The most famous land mark of this bustling town is the Rockfort Temple, a spectacular monument perched on a massive rocky out crop which rises abruptly from the plain to tower over the old city. It was one of the main centers around which the wars of the Carnatic were fought in the 18th century during the British-French struggle for supremacy in India. The city is a thriving commercial centre in Tamil Nadu and is famous for artificial diamonds, cigars, handloom cloth, glass bangles and wooden and clay toys. The Thirukarambanur Uthamar Perumal temple of Lord Purushottama is located ten kilometres from Thiruchirapalli, on the banks of the Kollidam River. 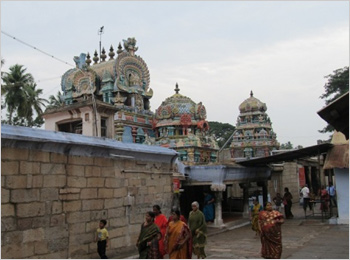 The temple is very simple and does not have huge gopurams. The vimana of this temple is known as udyoga vimana and there is a beautiful pond called Kadamba Pushakarani adjacent to the temple. 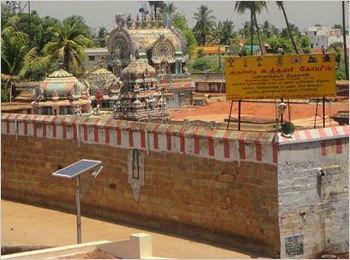 It is said that originally the five-headed Brahma or Panchmukha Brahma is the creator of this earthly planet. Lord Shiva also has five heads. Goddess Parvathy Devi thus mistook Brahma for Shiva, as she is very chaste and always casts her glance down, not looking straight at the man before her. So she offered flowers at Panchmukha Brahma’s feet, thinking they were her husband’s. Infuriated by this, so that Parvathy would not repeat this mistake, Shiva plucked off a head of Brahma. Thus Brahma became four-headed or Chaturmukha Brahma. As a result of his offence to Brahma, Shiva could not get the skull of Brahma off his hand, as it stuck fast to his hand. All efforts to remove it went in vain. With the head stuck to his hand, Shiva continued to perform his uncha vrutti (a Vedic system where brahmanas go from door to door begging for grains just sufficient for that day). But the skull would consume all the food! When Shiva finally came to Lord Purushottama (Vishnu), the Lord asked His consort Sri Mahalakshmi to offer food to Shiva. She did so and the bowl became full with more than sufficient food to satiate Shiva’s hunger. Mahalakshmi is named Poornavalli or one who fulfils the requirements of Her children. Shiva realized the greatness of Mahalakshmi, the universal Mother, and requested Her moksha. Mother Mahalakshmi directed Shiva to go to a place called Thirukandiyur and pray to Lord Vishnu there. Accordingly it is from Thirukarambanur that Shiva received instructions on moksha. Mahalakshmi is known as Thayar in Tamil, which means mother. She is regarded as the mother of the universe. Lord Purushottama When Sri Ramanujacharya offered his treatise on surrender to the Lord, he first offered his obeisance to Mother Mahalakshmi as She is more compassionate than the Supreme Lord, just like a mother is more attached to her children than the father.Bhrigu Muni’s curse stripped Brahma of worship at his temples. Lord Brahma was so worried that there was no temple for his worship, that he came down to Earth and performed austerities on the banks of the Kollidam River. To test him, Lord Purushottama stood there as a kadamba tree. Brahma understood that the tree was indeed Vishnu and began to offer worship to it. Lord Brahma was so immersed in the worship of Lord Vishnu as Purushottama that he totally forgot about his motive of penance. That was his pure devotional service. Many ages later, when Maharaja Janaka was performing a yagna on the banks of the Kollidam, a dog ate the haves rice kept for the offerings. To relieve himself from the sin of this, Janaka Maharaja worshipped Lord Purushottama in the kadamba tree and built a huge temple complex with shrines for Brahma as well. A very unique feature about this temple is that this is the only divya desam apart from Thirunavai in Kerala, which has Mahalakshmi in standing posture. Since She gave bhakti to Shiva here, She is seen in standing posture and the Shiva deity here is known as Bhikshadanar (a mendicant). Another very unique feature of the temple is that there are no doors in this temple, so devotees can worship the Lord twenty four hours a day! Since Lord Vishnu appeared as a kadamba tree at this place, it is called Kathambanur, which later became Karambanur. The name Karambanur is mentioned in the works of Thirumangai Alwar, one of the twelve Alwar saints of South India. This temple is commonly known as Uthamar Kovil, after the Lord’s name, Purushottama.

The devotees who visit the temple are couples seeking birth of a child.

The temple is about 10 kms from Trichy railway station and around 2 kms from Srirangam.

The nearest railhead and airport is Tiruchirapalli.

The temple is about 10 kms from Trichy railway station and around 2 kms from Srirangam.