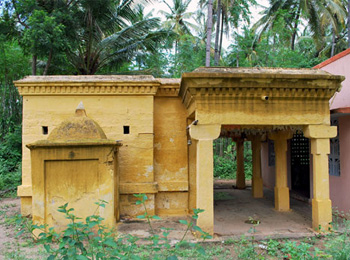 The Sri Swayambulingeswarar Temple is located in Amanimallapuram and is dedicated to God Swayambulingeswarar. It is said that in 1860, a man named Chinnavedi Chetty had a dream where God Shiva instructed him to find a Shiva Lingam in a tope and build a temple there. He immediately began to look for the Linga in his tope but in vain. While he was absentmindedly scratching the land with a stick, he felt something and on digging further he found the Shiva Lingam. He decided to build the temple under the tamarind tree where he found the Shiva Lingam. When he tried to cut the tree to make way for the temple, a lady saint came and advised him not to cut it down. Chetty was dejected and tried to take the Linga home but the Linga wouldn't move from its spot. Chetty returned home. It began to rain heavily with thunder and lightning that eventually felled the tree. Chetty's plans to build the temple were clear now and it was built majestically. The God is called Swayambulingeswarar. It is believed that the Linga is growing taller every day.