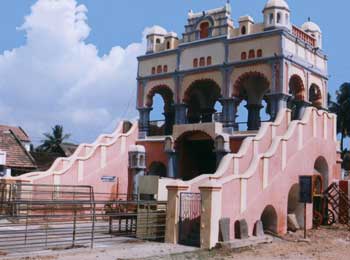 The district of Srikakulam is in Andhra Pradesh. It was ruled by the Chedidianasti kings, Satavahana kings and the Golkonda Nawabs in the olden days. Srikakulam was formed on August 15, 1950 when India got Independence. Srikakulam is also known to many as Uttarandhra and Kalingandhra.

The Sri Suryanarayana Swamy Temple is dedicated to the Navagrahas and is located in Srikakulam. The famous Sun God Temple situated in Arasavalli Village. It is one of the ancient and all among two sun God temples in India. According to Padmapuranam, Sage Kasyapa installed the Idol of Surya at Arasavalli for the Welfare of mankind. Therefore, the Surya is of Kasyapasa Gotra. He is also termed as planetary King . According to the Sthalapuranam of the temple, Lord Devendra found this temple and installed the existing idol of the sun God commonly known as Lord suryanarayana Swamy Varu under the following circumstances.

The main deity is Suryanarayana Swamy. The presiding deity the Sun God about whom the puranas speak as the embodiment of Trimurthies, Brahama, Vishnu and Maheswara.

Once, Lord Devendra, ignoring the words of Dwarapalaka Nandi, attempted to force his entry for Darshan of Sri Rudrakoteswara Swamy varu at an untimely hour when Lord Shiva was along with his consort. The Dwarapalaka Nandi in the discharge of his duties kicked the intruder. Thus kicked and injured by the Devine attendant Indra fell down senseless. And in his unconscious state Indra dreamt that he would be relieved of his pain of injury in his chest caused by Nandi if he had built a temple and install an Idol of the Sun God . After regaining his consciousness, he remembered what he dreamt. Following his dream, he picked up handfuls of earth three times at a place where he lay, and there he found this beautiful idol of sun God with his three consorts Usha, Chaya and Padmini. At the base of the idols are the figures of Mathara and Pingala the Dwarapalakas and high up are the two divine saints, sanaka and sanadana holding Chatrams(An Umbrella ). The Sun God is depicted as riding over a chariot drawn by Anura, the Radhasaradhy . All these figures are exquisitely carved out of a single black finely polished granite stone. The Lord who sees physically everything in the course of his daily round over the universe and who fully understands the truth behind all things, is not only regarded as Pratyaksha Daivam ( Visible God ) but also the source and sustainer of all life .

Ratha Saptami is the festival of Lord Surya Narayana Swamy, Celebrated in the month of February or March and considered as birth day of God Surya. This day is also known as Surya Jayanti.On this auspicious day we will be allowed to have Nija Rupa Darshan from 5am - 2pm.

Lord Surya's Kalynotsavam is celebrated from Chaitra Suddha Ekadashi to Bahula Padyami (6days). Generally it comes in the month of March and April. Lord Surya has 3 consorts. They are named Usha, Padmini and Chaya, daughters of devasilpi (mason) Viswakarma. The Lord married them.

As the temple's Kshetrapalaka (Mayor) happened to be Bhuvaneswari Sahita RamaLingeswara Swamy, Maha Sivaratri is celebrated in the month of February and March. Special Abhishekas like Rudra Bhishekam, Ekavara Abhishekam are performed at night. The special reason for this to be performed in the night is to keep the people awake (Jagaranam).

This Ritual is otherwise known as Holika Pournima or Holi. This comes in the month of March i.e Phalguna Suddha Tryodasi, Chaturdasi & Pournima. On Tryodasi (i.e. 1st day) at 6pm Kamadahanam festival is celebrated. Dry grass (straw) is burnt as a sign of victory over evil desires. This ritual performed at 7pm in the holy garden with the procession of Lord taken in procession. On the third day ie on the Dolotsavam day the lord will be cradled in the holy garden at the outskirts. This cradle is known as Dola

In the month of Vaisakhi devotees give their offering to the Lord for health & wealth. This is one of the holiest months for Sun Worshippers

This comes on Sravana Suddha Pournami. Vishesha Archana is performed on that day. A new sacred thread is worn by Lord Surya.

This is the birthday of Lord Krishna. It is celebrated for nine days starting from Sravana Bahula Ashtami.
1st Day - Vratam
2nd Day - Utti Festival from 7 pm at the Holy Garden.
3rd Day up to 9th Day - The function will be celebrated from 6pm onwards
Prasadams will be distributed to the devotees.

On Asweeyuja Bahula Chaturdasi & Amavasya the Lord is taken in procession to the holy garden. An idol of Narakasura is made & burnt as sign of victory of good over evil. On the next day i.e on Diwali day the temple will be illuminated with special lights.

Every year on Kartika Suddha Dwadasi Lord is taken to Indra Pushkarini & Lord is launched on "Hamsa Nava" is turned around for twelve times, namely Parikramas. During this time Visesha Archana is performed to the deity & devotees will place deepams on the Pushkarini water. This is to show way to heaven.

On this day the Vaikunta Dwara, the way to Heaven (North door) is opened. Devotees entering the temple through that dwara. Temple is treated as Heaven that day (auspiciously). Special Vratam and Annadanam will be performed on that day.

On that day Sun is said to be changing from Dakshinayana to Uttarayana. Special abhishekam & Archana are performed.

It is approached with prayers to strengthen the bone, to attain wealth, for longevity and for the cleansing of sins. The people who perform Suryanamaskara recite Maha Soura and Aruna Manthras containing Powerful beejaksharas of Rigveda and Yazurvada for giving good health, so that it is said that Arogyam Bhaskaradhischet. The mantra or Hymn is a spiritual formula harmonizing sound which always protects the register in every way. This is the secrecy of the Sun God Worship. Sunday is considered as most auspicious day to Sun God worship.