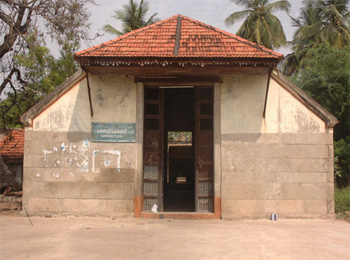 The Sri Sundareswarar temple is located in Durvasapuram and is dedicated to God Shiva. After God Rama returned to Ayodhya after the war with Ravana, the sages also returned to their respective places. Sage Durvasa was passing through this place when he found a Shiva Lingam here and worshipped the God. In course of time, the Linga was buried below the earth. A shepherd who was passing by fell down as the root of the tree tripped him. The milk he was carrying also was wasted as it got spilt when he fell. When he cut the root to free himself, it bled profusely. On digging further he found the Shiva Lingam. Eventually a temple was built here. Since Sage Durvasa passed through here, it was called Durvasapuram. The God was called Sundareswarar and the Goddess Bagampiriyal meaning that she never parts with the God. The temple is shaped like a tent and is dilapidated. There is no tower. Devotees offer donations for the renovation and consecration. There are shrines for Dakshinamurthy, Saturn, Sun, Moon, Saptha Kannikas and the guardian deity Karuppusamy.