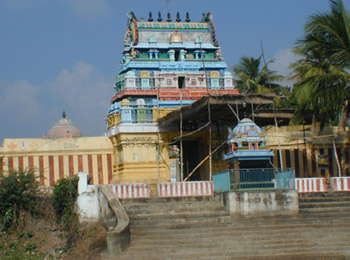 Sri Srinivasa Perumal Temple also called as ‘Annan Perumal Temple‘ is located at ‘Thiru Vellakulam‘, Thirunangur, Nagapatnam district of Tamilnadu, dedicated to Lord Vishnu and also one of the 108 Divya Desam Temples.This temple lies in Thirunaangur of Tanjore district in Tamil Nadu. Perumaal here is considered equivalent to Venkatesaperumaal at Tirupati and this shrine is also known as Tentirupati.

This temple is in a small town called Annan Koil or Thiru Vellakulam.It's about 7 miles (10 kilometres) away from Seerkazhi. It is one among the eleven divyadesams of Thirunangur Tirupathis. This kshetram is also known as Then Tirupathi ( Tirupathi of South). It is said that those who can not visit Tirupathi-Tirumala , those devotees can do all the offering to Srinivasa Perumal of Thiru Vellakulam to get the blessings of Lord Venkateswara. 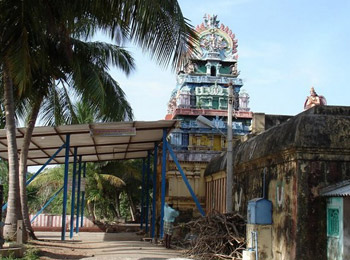 The main deity of this temple is fundamental divinity of this temple is Lord Tirivikrama Narayana Perumal with His left leg over His head, confronting the east course. Alternate divinities of this temple are Goddess consort of Lord Tirivikrama Narayana Perumal, Lord celebration god, Goddess Mattavizhum Krishna and the Azhwars. The fundamental divinity in this temple is additionally called as King of World. The Thirivikaraman Perumal Temple is one of the Divya Desams where the colossal holy person Thirumangai Azhwar sang songs for the directing god and named the temple as Vinnagaram. The temple is implicit a Dravidian style and it has three-layered Rajagopuram (entryway tower). 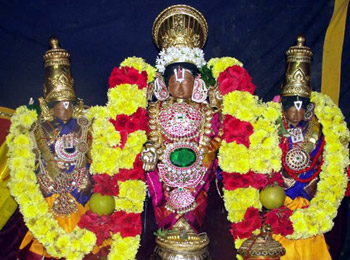 Moolavar of this Divyadesam is Sri Srinivasan. Otherwise called Kannan, Narayanan and Anna Perumal. He is giving his seva Nindra (Standing) Thirukkolam confronting his thirumugham towards eest course. Prathyaksham for Ekadesa Rudhirar and Swetha Rajan. The Thayaar found in this sthalam is Alarmel Mangai Naachiyar. The Utsavar Thaayar is Padmavathi. 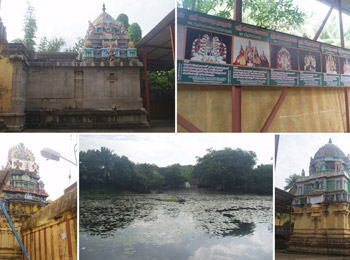 Once there was a lord named Swethan, the child of Thundu maran of the Surya dyansty Perumal took Mother Lakshmi in His grasp who was performing repentance then confronting east. Thus He is confronting west. As Mother performed compensation in Shenbagaranya locale, She is commended as Shenbagavalli. Ruler is Jagannathan. The place's name has in it the name of Lord. Sri Nandhideva, bull vehicle of Lord Shiva went to Vaikunta and in his desire to see Perumal He didn't regard the Dwarapalakas. They reviled Nandhi that His body would experience the ill effects of unreasonable warmth. At the point when Nandhi educated his Lord Shiva, He exhorted him to go to Shenbagaranya and perform atonement where Mother Mahalakshmi likewise was in retribution on Lord. Perumal conceded darshan to Nandhi and named the spot Nandhipura Vinnagaram in valuation for his interest to have His darshan overlooking the Dwarapalakas. Master Jagannathan is holding His weapons sword, bow, plate, dhanda and conch. In ahead of schedule days, Lord was confronting east. To acknowledge Mother Mahalakshmi in His Chest and to acknowledge sovereign Shibi who yielded his substance for the purpose of a pigeon, He turned west then, as per sthala purana. Nandhi and Brahamma are in the sanctum with Perumal advancing Saivism-Vaishnavism solidarity. History Mother Mahalakshmi had a craving to have Her place in the mid-section of Lord as She was perpetually serving the Lord from His feet. To understand Her point, She resulted in these present circumstances place Shenbagaranyam and performed atonement. Master couldn't bear Her partition. He took Mother on His mid-section here on a Friday in the full moon fortnight in the month of Aipasi-October-November.

Festivals are Thirumangai Azhwar Mangalasasana Utsavam and Garudasevai – January or February. First 5 days of vaikasi are celebrated as vasantha utsavam, protasi bramotsavam is celebrated too like Tirupathi and the last friday in the tamil month of Aadi, thirukalyanam are been done.As in Tirupathi Thirumala, Brahmmotsavam is celebrated in the temple during Purattasi (September-October). Summer festival is observed in Vaikasi (May-June) and the Lord’s wedding festival is celebrated on the last Friday in the month of Adi (July-August).

The (Tulabaram) is done here where devotees offer articles equivalent to their weight seeking blessings for removal of obstacles in matrimonial talks and freedom from the fear of death.

This Divyadesam is known as "South Tirupathi". All the offering in because of the Thiru Venkadamudayan of Tirupathi can be offered here as well. sthalam is the avathara sthalam of Kumudhavalli Naachiyaar (wife of Thirumangai Alwar). At whatever point Thirumangai Alwar results in these present circumstances sthalam, he was given two coconuts spread with turmeric powder. There is an extraordinary exclusively included in this issue. (ie) at whatever point child in-law goes to his wife's place, he would be offered and greated alongside the coconuts. Since, Thirumangai Alwar wedded Kumudhavalli Naachiyaar, he is offered alongside two coconuts.

Devotees come to the temple to celebrate their 60th, 70th and 80th birthdays.

The nearest Airport is Tiruchirapalli Airport, which is located at 145 km (90 miles) away from the town.

Nagapattinam railway junction is a major junction connecting Thiruvarur from the West, Nagore from the North, Velankanni from the South and Karaikal from the East. There is an express train running daily to Chennai via Mayiladuthurai and Ernakulam via Coimbatore connecting all major cities.

A wide network of roads connect to Chennai, Madurai, Tiruchirappalli, Pondicherry, Thanjavur and all other major cities. Nagapattinam is located at a distance of about 330kms from Chennai by Road.