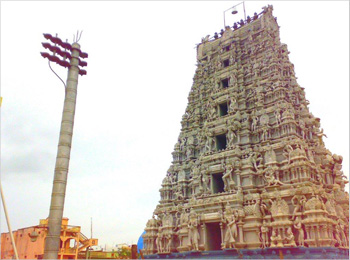 Sri Someshwar Janardhan Swami Devastanam is located on the banks of River Godavari at Ghunupidi near Bheemavaram of West Godavari district. It is one of the famous Pancharama Kshetrams in Andhra Pradesh.

Goddess Annapoorna Temple is located above the sanctum sanctorum which is a unique construction of this temple. This resembles the fact that Lord Siva keeps Ganga on His head. To the South of the sanctum, Goddess Adilaxmi can be seen. To the East, there is a Pushkarni pond which is also called Chandrakundam. Inside the temple there are other deities like Lord Aanjaneya Swami, God Kumar Swami, Navagrahas, Sun God and Lord Ganesh.

The main deity is Lord Shiva in the form of Sri Someshwar Janardhan Swami and His consort is Sri Rajarajeshwari Amma.

The temple was built by King Chalukya Bheema during 4th century. The Shiva lingam was installed by Moon God and hence the temple was named as Somarama. It is believed that the colour of the Shiva lingam changes according to the Lunar-rays. In a lunar month the idol turns white for 15 days gradually day by day and turns black for another 15 days.

Maha Shivarathri and Devinavarathri are the main festivals celebrated at this temple.

Government and Private Bus services are available from all major places. The nearest bus station is at Bheemavaram.