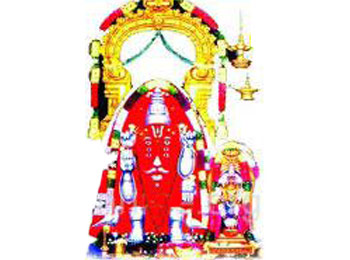 Sani Bhagwan temple is a god Shani temple located in Kuchanur, a small village near Chinnamanur in Theni district. Similar to Thirunallar, it has a separate temple for God Saniswara, unlike other places where he is part of the Navagrahas.

The main deity in the temple is a Suyambu. Legend has it that it rose up as a black lingam. Just next to the presiding deity, the procession is set up. The idol is taken out in procession once every year during temple celebrations. On the north of the Saniswarar sannidhi ,a sub-temple devoted to God Muruga (Subramaniaswamy Kovil) is situated then following it is one for God Vigneswara. On the left Landasanyasi sannidhi is situated. On the banks of the river, a few yards from Sani Bhagwan temple, again there is a shrine for Sonai Karuppannasamy. The river Surabhi, according to its name, has flowing water all through the year. Therefore called jeeva nadhi. It receives water from the Rajavaikal (channel) of Suruli River.

Here Saturn indicates the ascetic, rich with inner spirituality, and lost to this material plane of existence. Saturn is a malefic graha. He rules over the two sidereal signs of Capricorn and Aquarius. He is exalted in Libra, and fallen in the opposite sign of Aries.

Saturn's most powerful place in the chart is in the 7th House and the Kendra's, or Angles. He is a particularly beneficial planet for Taurus and Libra Ascendants. Saturn's nature is Vata, or Airy. His gem is Blue Sapphire and all black stones and his metal is Lead. Saturn's direction is west and his day is Saturday.

He reaches full maturity at age 36. In Vedic myth Saturn is the son of the Sun, born to his shadow wife, Chaya. Saturn is lame because one of the Sun's first wife Sanjana's children became angered with him and struck him in the foot. Thus Saturn walks with a limp, which accounts why he is the slowest of the Grahas.

The graha SANISCHARA (Saturn), also known as Manda, is generally known to affect one adversely on occasions when he occupies certain positions in one's horoscope like Saade Sati (7 1/2 years) Ashtama Shanaiswara (Saturn in 8th house - 2 1/2 years) etc. He is the Lord of Makaram and Kumbam.

He is the slowest moving planet taking 2 1/2 years in each Rasi, completing one cycle every 30 years. A prayer to this Devata, especially on Saturdays, is said to mitigate the hardships one will have to face during these periods. Sanischara bestows all benefits to the devotees who pray sincerely to him.

Saneeswaran resides in each Rasi for a period of 2 1/2 years. When Saneeswaran resides in the 12th, 1st and 2nd house, it is 7 1/2 Naatu Sani ; when in the 4th house, it is Arthashtama Sani; when in the 8th house, it is Ashtama Sani. During these periods, he troubles the native.Problems from Govt., peers, wife, children, slowdown in business, loss of property, leprosy are caused by transit of Sani.In a person's life, 7 1/2 Naatu Sani aspects thrice, the first called Mangu Sani, the second called Pongu Sani and the third called Marana Sani.

Saneeswaran is reputed to be both, a giver and destroyer. A person who prays to Saneeswaran will be blessed with not only riddance from the problems and worries faced, but a life that one desires.His wives are Neela Devi and Manga Devi. The presiding deities are Dharbaranyeswarar (Swaymbumurti) and his consort Bogamartha Poon Mulayal. He is the Lord of Maharam and Kumba Rasis and faces the West direction.

According to legend, the ruler of Kalinganadu with Mani Nagaram as the capital, King Dinakaran had to suffer under the wrath of Sani Bhagwan for seven and a half years. On knowing about it through an astrologer Dinakaran's son Chandiravadanan went to a dense forest and sat on a penance in the middle of Kongu ,Sandalwood and Senbagam trees near to the bank of Surabi river to get the blessings of God Saniswara so that his father could be freed from the curse. God Saniswara impressed by his prayers, came before him at Senbaganallur and accepted his prayers. This place was later called Kuchanur. It belongs to Chinnamanur Panchayat Union and is bordered by channels and forests.

Devotees visiting the temple take a dip in the Surabi River and go on to offer prayer to him. Three times the poojas are executed, i.e., early morning, noon and the evenings. Agama sastras are followed for daily poojas and archanas. After feeding the crows nearby during uchikala poojas, prasadam is given to devotees. This is done because crow is considered to be the vahanam (celestial carrier) of Bhagwan Sani. It is supposed that here Sani Baghwan himself got released of the Brahmmahathi dosha which is a sin that affects a person for some serious offense. Sometimes when crows do not partake of the offering, the entire gathering consisting of priests plead before Sani Bhagwan to pardon their faults. There has never been an incident when crows have not accepted the offering. A mixture of cooked rice and gingerly powder, Ellu pongal which is is a fixed prasadam offered here.

The influence of Saturn is to delay, to withhold. As the slowest moving of the planets he retards things, holds back their development. Saturn indicates property, land and fixed assets. Those who obtain wealth through a well- disposed Saturn may become misers, and will carefully hold on to what has with such difficulty been acquired.

The nearest Airport is Madurai. It is well connected with the other parts of the country.

The nearest Railway station is in Theni, Dindigul. Salem and Madurai are the nearest railway junctions.

Kuchanur is well connected by Road and there are buses from Salem, Mettur, Dharmapuri bus stands at every 5 minutes to this temple.