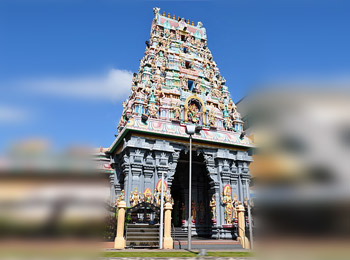 Sri Ruthra Kaliamman Temple is dedicated to Goddess Kali. It is located in 100 Depot Road, Singapore.

Sri Ruthra Kaliamman Temple is a temple for the goddess Kali who is the presiding deity. The other deities of the temple include Sri Vinayagar, Sri Subramaniar, Sri Muneeswaran, Navagrahas, Sri Kaleeswarar, Sri Mangalambigai, Sri Dhakshinamoorthy, Sri Sandigeswarar and Sri Nandeeswarar.

Sri Ruthra Kaliamman Temple was originally a small shrine, housed in a wooden building, situated at the Alexandra Brickworks grounds at Pasir Panjang Road (present location of Port of Singapore Authority, PSA building) and catered to the Hindus working at Brickworks and those who lived in the surrounding areas.

Mr. Lakshmana Nadar, an employee at Brickworks, is believed to have been responsible for building this shrine in 1913. In 1923, through the assistance of the Borneo Company, whose subsidiary was the Alexandra Brickworks, the wooden structure was replaced by a brick building to give it the form of a simple temple.

Then followed the Asthabandana Maha Kumbabishegam (Consecration Ceremony) on 11 February 1968 for the installation of new granite statue of Sri Ruthra Kaliamman to replace the non granite (suthai) statue of the Deity. On 23 October 1969, the Prathishtai (Supplementary Consecration Ceremony) was conducted to install the granite statues of Sri Vinayagar and Sri Subramaniar to replace framed pictures of these Deities. The late Mr. K. Raman Nair, an employee of Pasir Panjang Power Station, and a staunch supporter of the Temple - ordered the three statues from India and donated them to the Temple.

About two years later, on 2 December 1971, Alexandra Brickworks' Management served notice on the Temple to quit by 30 June 1972 as it had decided to sell its property to the Port of Singapore Authority. After protracted negotiations, the Brickworks Management and the Temple's Management Committee agreed upon the sum of S$260,000/- as outright compensation to vacate the Temple premises. With the assistance of the late Mr. S.L.Perumal (the Temple Adviser) the four Deities, Sri Ruthra Kaliamman, Sri Vinayagar, Sri Subramaniar and Sri Muneeswaran were moved during the Balasthabana Prathisthai (Temporary installation Ceremony) on 5 February 1973 to the Sri Manmatha Karunya Eeswarar temple at 249, Cantonment Road, Singapore 0208, where they were to remain until a new temple was built to reinstall them.

Later the temple was demolished as Alexandra Brickworks sold the land to the Port of Singapore Authority. Meanwhile, construction work for the new temple began on 27 October 1980 after the Housing Development Board (HDB), invited tenders, in February 1978, through the press for a religious site 2,000 sqm (21,528 sq.ft) in area at Depot Road on a 99-year lease - which was successfully tendered by the Temple Management for $195,687/-.

The consecration of the temple on 11 September 1983 marked the climax of 10 years of the effort by one and all in the successful shaping of the Temple. On 27 November 1987, the Sakthi Sametha Navagrahas Kumbhabishegam was held, the first of its kind in Singapore. Such statues are also very rarely found - even in India. Another significant ceremony was the inaugural Flag Raising Ceremony, which was held on 22 April 1988.

With fund limitation, the idea of a neo-classical temple at 10 times the initial financial resources available was thought to be building castles in the air but it slowly but surely materialized. Apparently the success story of the birth of the new updated temple costing about $2.7 million.

How To Reach Singapore

Changi Airport is one of Asia’s best-connected airports and is an important hub for international aviation.

Singapore is connected to Malaysia, Johor Bahru and Kuala Lumpur by rail, with a route to Bangkok. There are three trains per day, including a sleeper. Trains depart from and arrive at the Tanjong Pagar MRT station Singapore.