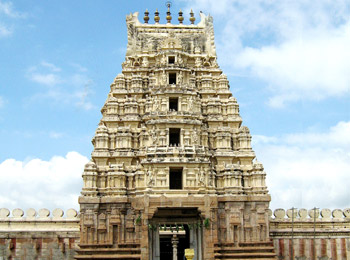 The Sri Ranganthaswami Temple in Nellore, Andhra Pradesh, India is a Hindu temple dedicated to Lord Ranganatha a resting form of Lord Vishnu. This temple, also called Talpagiri Ranganathaswami temple or Ranganayakulu is one of the oldest temples in Nellore. It is located on the banks of the Penna River and is believed to have been constructed in the 12th century. Just before the main entrance of the temple is a huge tower, called Gaaligopuram, which literally means "wind tower". This tower is approximately 70 feet high and has 10 feet of gold plated vessels on top of it, called kalashams. 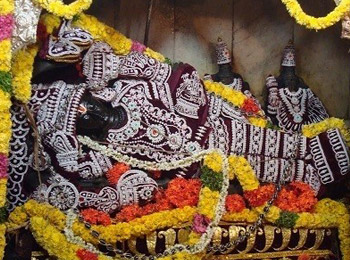 Sri Ranganathaswamy Temple was built in 7th century by Pallava kings. The temple was later developed by the king Raja Mahendra Varma in 12th century. The 7 storied main entrance gate way Gopura is 70 feet high appears huge. The images of Sages, Lord Brahma, Lord Vishnu and Maheshwara and sculptures reflect the architecture brilliancy. Sri Vishnu Sahasranamavali- The 1000 different names of Lord Vishnu are penned on the walls of sanctum sanctorum. Devotees encircle the temple chanting Sri Vishnu Sahasranamavali. Lord Ranganathaswamy is in reclining posture on Anantha.There is a mirror house which stands as an attraction for the devotees. There is a separate shrine of Goddess Rajya Lakshmi Devi to the south of the main temple and Goddess Andal Ammavari shrine to the north. 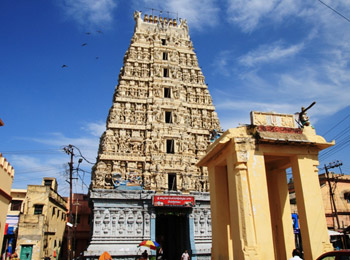 The idol of Lord Ranganatha or Ranganayakulu as known locally or Pallikonda Perumal (The Reclining Lord Narayana) is inside the Garbha Griha. Another deviation from the usual Ranganathaswamy idols is that the Ranganayaka Swamy of Nellore reclines in an opposite direction, if one visits the other temples dedicated to Lord Ranga, we will know the difference. This again could be due to the vastu specifications of a West facing temple. The eyes of the idol are so bright and lifelike that you feel the Lord is going to stand up any moment and talk to you.

As per the legend, Lord Vishnu wanted to visit Bhooloka along with His consort Goddess Sridevi. He said Adisesha to be the place as Lord’s residence to stay at Bhooloka. Obeying the order of the Lord, Adisesha took the form as a mountain in this place. Thus the place is called as Talpagiri Kshethra. It is believed that sage Kashyapa performed Poundarika Yaga on Ekadasi day here. Lord appeared and blessed him.

Every year during the month of March–April (which varies according to the Indian calendar) a grand festival is celebrated. These are called Brahmotsavam. Vaikunta Ekadasi is also celebrated annually witnessed by many devotees.

The nearest railway station is Nellore Railway Station which is 4 km away. Bus services are available to visit the temple.

The nearest airport is Tirupati Airport which is 127 km away. Bus and taxi services are available to access the temple.