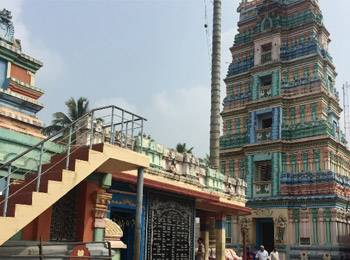 The Rameshwara Swamy Temple in Achanta in West Godavari district of Andhra Pradesh is a famous temple of Lord Shiva. 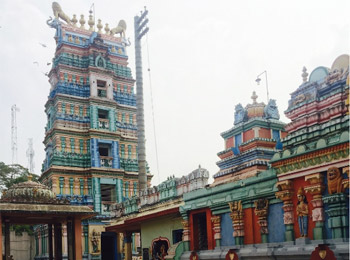 Achanta is famous for an ancient temple of Rameswara Swami, one of the forms of Lord Shiva. Achanta was also called as Marthandapuram in the past and the Siva Lingam present in the temple is said to be swayambhoo (self-formed). The Lord is popularly called as Achanteswara Swami.There are about six Shiva lingas in this temple compound- Lakshmaneswara linga, Someswara linga, Markandeya linga, Bhimalinga, Skanda linga and Indra linga. The temple is also known for its beautiful architecture. The temple has a huge gopuram with five storeys at the entrance. On the top of this gopura, you can see two lions standing over the head of elephant. In between these two lions, you can see five Kalasha. A tall Dwajastambham can also be seen in front of the mukha mantapam inside the temple. As you see in most of the South-Indian Temples, there is a sacred pond, called as Pushkarini , beside the temple. 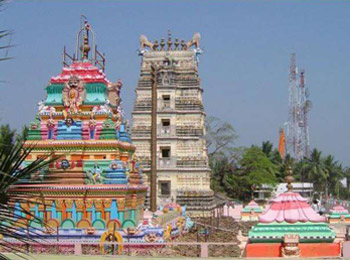 The presiding deity is Rameswara Swamy and is said to be a Swayambhu Linga, a self-manifested Shivalinga. This Swayambhu Linga is also known as Achannuteswarudu in the form of a female breast. It would be astonishing to see the delicate and detailed carving of two lions standing over the head of the elephant. There are sub-shrines in the temple for Lord Vigneshwara, Goddess Saraswathi and Saptamatrukalu.

Apart from regular poojas, abhishekams and festivals, Mahasivarathri is celebrated with much fervor and gaiety. The temple is flooded with devotees from all over the state to celebrate the Shivaratri festival to pray to Lord Rameshwara Swamy.