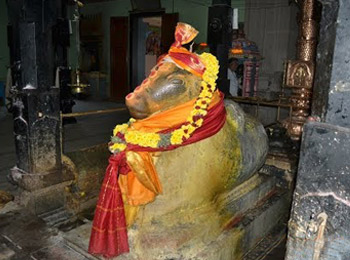 The Sri Nei Nandeeswarar Temple is located in Vendanpatti and is dedicated to God Nei Nandeeswarar. Nandhi worship is paramount here. Parambumalai, which is close to this temple was once ruled by Pari Vallal, a legendary king known for charity. There is also a Shiva temple here. The deities of the Meenakshi Sundareswarar Temple are here as well. Believed to be constructed by the Pandya kings, it could be that. The Pandyas who visited this place would have worshipped Sri Meenakshi - Sundareswara on a Pradosha day while on their journey and would have built the temple. There is no historical record of this temple - Historians think that the Cholas might have had a role in building this temple. The story goes that two Nandhis were brought from Kodumbalur of which, the larger of the two was taken to Thanjavur and the small one, installed here.