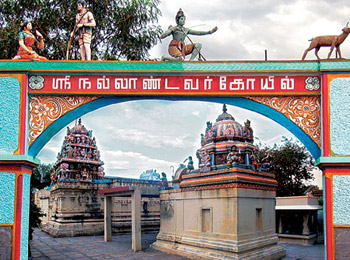 The Nallandavar Temple is located in Mannaparai and is dedicated to God Nallandavar. This place is known as the region where God Sri Rama killed the magic deer and was known as Maan (deer) Poondi. Later, it changed to Mamundi after a king named Mamundi Vallal who was known a powerful warrior and very charitable. He was also believed to have had some super powers. As he protected the people and governed the people in a fair manner, the place is named after him. Another story associated with the temple says that when the Saptha Kannikas, Brahmi, Maheswari, Goumari, Vaishnavi, Vaarahi, Indirani and Chamundi were bathing in a tank, they were harassed by some hooligans. They cried out for help and King Mamundi rushed to protect the Kannikas. Grateful for his prompt and timely help, they said that as their elder brother, he would be known as Nallannan, Nallandavar, Nalliah and Mamundi. There are individual shrines for God Anumadhi Vinayaka, Madurai Veeran, Parikarar, Ezhu Karuppanaswami, Omkara Vinayaka, Pechiamman, Pattathu Yanai, Nallandavar Yanai, Teppakulam Murugan and Sri Anjaneya. Saptha Kannikas are respected as the sisters of Nallandavar and are installed nearby in a separate shrine. Pujas are performed first only to Sapthakannikas. An ascetic from North named Lada Sanyasi was asked by Nallandavar to stay here itself to help the devotees and bless them. Accordingly, the saint is here in a separate shrine with His legs tied. Second Puja is offered to him. The third puja goes to God Nallandavar.