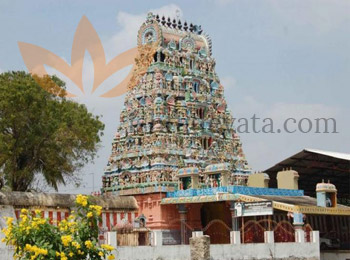 The Sri Mullaivananathar Temple is located near Papanasam, Avalivanallur and other Shivsthalams nearby and it is dedicated to God Shiva.This temple is known to be the 18th in the series of the Tevara Sthalams in the Chola kingdom which are located on the bank of Cauvery river.

This temple is quite vast and covers an area of around 125000 sq ft. The shrine of Nataraja here is a great attraction. It is of a chariot shape and catches the attention of all the devotees. The prakaram that encircles God Shiva’s shrine is enclosed and crowned with a gopuram just at its entrance. Goddess’s shrine is located on the left of God Shiva’s shrine. God Subramania’s shrine is located in between God Shiva and Ambal’s shrine. There are a lot of inscriptions in this temple which can be dated back to Raja Chola’s time.

The chief or the presiding deity in this temple is known as Mullaivananathar and his consort is named as Madhavivaneswarar.

According to legend, Goddess Parvati helped a helpless and needy lady who was in her motherhood. Goddess also saved her foetus and that gave the name of Karukaavoor to this place. Goddess Parvati and God Shiva’s sons, Ganapati and Nandi are also in the swayambu form here.

It is known that worshipping in this temple can help struggling couples in getting an offspring.

The nearest airport to this place is the Tiruchirappali International Airport.