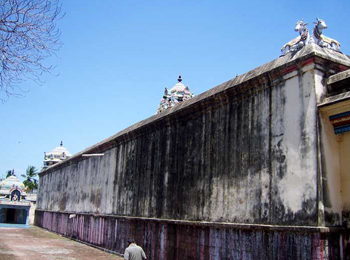 
The temple of Manikkavannar is located at Palakkurichi and can be reached through a diversion to Vadapathimangalam at Mavoor junction in the Thiruvarur - Thiruthuraipoondi route. This temple is one of the 275 Thevara Paadal petra sthalams. The temple is praised in the Thevaram songs of Saint Sundarar. and is the 118th temple on the southern bank. Kotpuli Nayanar Guru Puja on Jeshta (Kettai in Tamil) star day in Aadi (July-August) is the primary celebration of the temple. Additionally, all Lord Shiva related vratas and festivals are strictly followed. 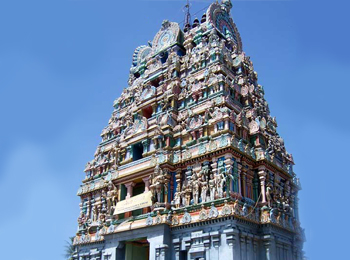 Nagarathar devotees had generously added to this temple facing the eastern direction. At the eastern passageway of the tower is the revered place for Lord Vinayaka facing west who is sid to have directed the way to be taken by hand to Saint Sundarar. The Rajagopuram is of a five level structure. There are shrines for Lords Vinayaka, Muruga, Viswanatha, Mother Gajalakshmi and the Navagrahas, the nine planets, in the internal prakara. Deities Dakshinamurthy, Lingodhbava, Brahma are on the Koshta - the wall around the sanctum sanctorum. Along with the deities a sannidhi for Kotpuli Nayanar cn also be seen. Nataraja Sabha and procession divinities are in the Mahamandapam.


The deity of this temple is Manicka Vannar and also known as Rathna Pureeswarar. He is accompanied by Brama Kunthalambica / Vandar Poonkuzhali. Lord Muruga, Goddess Gajalakshmi and Goddess Saraswathi shrines can be found in the prakara. Lord Dakshinamurthi and Nandhi are on the Goshta. Saint Meikanda Nayanar has a separate shrine in the temple. There is also a shrine for Ashta Naga Vinayaka - Lord Vinayaka with 8 serprents . This shrine appears as if in an anthill. Mother Durga who destroyed demon Mahishasura appears with eight hands with a parrot in Her lower left hand and all graceful though holding weapons in hands. Muyalaga the symbol of ignorance and a serpent are under the feet of Lord Nataraja. Lords Vishnu and Brahmma appear worshipping Lingodhbava in the goshta. Sani Bhagwans shrine is located at the entrance of the temple facing east.


Kotpuli Nayanar one of the praised 63 Nayanmars and a native of this place was the administrator of the Chola armed force. He came to be known as Kotpuli because of his bravery and ferocity when he was face with foes. He was well known for his contributions towards to this temple. He used to spend a considerable portion of his income in obtaining paddy to be utilized for the maintenance and improvement of the temple. Once, when he went out to war against the adversaries of the kingdom, he gave strict commands to his people to utilize the all supplies of paddy for the temple and if anyone failed to do so would be killed. After he left of to the battle, the land faced acute starvation. The family failed to utilize the paddy meant for temple utilization. Kotpuli Nayanar returned victoriously from the war and was stunned that the entire paddy in store that was meant to be used for the temple had been utilized by his kin. He ordered his security to see to that none escape from the house. He called his guardians, wife and youngsters and brutally killed them with his sword. One young man, who was very weak and unable to move, was still alive. The security requested that Nayanar not to punish him as he didn't take food for quite a long time. Nayanar answered that though he did not eat the rice kept for the Lord, he would have indirectly encouraged his mom, by not protesting to the act, and cut him into two pieces. Lord Shiva appeared before him with Mother Parvathi on His bull - Nandhi and said that every one of his kin had come to his lotus feet and requested that Nayanar go along with them. He granted salvation to Kotpuli Nayanar. Once when Saint Sundarar visited the temple he was stunned that Lord and Mother were missing. Lord Vinayaka directed Sundarar to the northeastern direction where Lord and Mother were planting paddy. Sundarar being an ardent devotee, requested that the Lord stop the work for the day and asked for to return to his alter while he would do the pending work of planting the following day. Responding to the devotee's prayers they came into the temple. An elephant had also worshiped Lord Shiva of this tmple. It dug a spring and used to daily bathe the deiity and worship him. This elephant attained salvation. That spring is known as Kari (elephant) theertham. Kotpuli Nayanar offered to Sundarar his girls Singadi and Vanapagai to serve him. Sundarar acknowledged them as his little girls. All the Murthis of the deities are adorned with a Rudraksha called Makarakandiga. King Rajenendra Chola and his sibling needed to collect the jewels left by their guardians. They were not able to judge the worh of these adornments. Both sought out assistance of the Lord of the temple to sort out the problem. Lord Shiva came in the disguise of a precious stone vendor and helped them. As Lord came as precious stone trader, he is extolled as Rathnapureeswarar.


People come to pray the Lord looking for answers for issues in family, resources that couldn't be apportioned and for high return in horticulture. It is the staunch conviction of the devotees that Lord will help in providing solutions to such complex issues. Devotees perform abishek to Lord offering vastras.


Maha Shivrathri in the months of February-March; Margazhi Tiruvadhirai in the month of December-January; Panguni Uthiram in the month of March April and Mahalakshmi Puja on all Poornima-full moon days are grandly celebrated in this temple


Tiruvarur has a station which is well connected with Tajore, Trichy, Kumbakonnam.


Plenty of buses from Kumbakonnam, Tanjore.