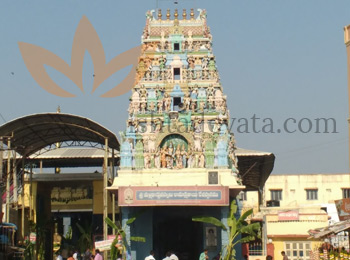 
Jonnawada is located in Butchireddipalem Mandal, in Nellore in Andhra Pradesh. It is located on the banks of River Pennar. 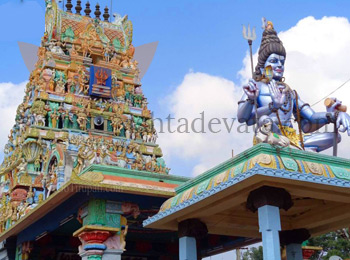 Sri Mallikarjuna Swamy temple and Kamakshi Amma temple were constructed during 1150 AD. The Sri Chakram was installed in the temple complex by Sri Jagadguru Aadi Sankaracharya. The flag mast and the gopuram of the temple are decorated with five Kalasham made out of gold. The devotees take a holy dip into Kachapa Teertham before entering into the sanctum. The Raja gopuram on this temple is wonderfully carved in beautiful designs and patterns with the portraits of gods and goddesses carved on it.

There is bus service from Nellore to Jonnawada. For the convenience of the pilgrims there are choultries of the Devastanam and TTD and also private choultries. Every year, during the celebration of Brahmstsavam in the month of Vaisaka, lakhs of devotees throng the holy centre to worship the goddess to attain salvation and Friday is the day very dear to Kamakshitai. One can find persons, persecuted by evil spirits, circumambulating in the temple precinct. A bathing ghat has been built on the bank of the Penna, for the convenience of the pilgrims.


In Treta Yuga sage Kashyapa visited the earth as he wanted to conduct a Yagya. He chose north of Vedadri as a place to perform Yagya. After completion of the Yagya, a bright light appeared which spread over the entire earth. Lord Shiva appeared as Lord Mallikarjuna Swamy from the fire of Yagya. Thus, the place is known as Yagnavatika Jonnawada.


Apart from regular pujas and Abhishekams, Brahmotsavam festival is celebrated annually during Vaisakha Month. Devotees visit the temple during the festivals to get the blessings of Lord Mallikarjuna Swamy and Goddess Kamakshi Ammavaru. A special puja is performed every Friday as it is a day very dear to Kamakshi amma.

Some TTD Managed rooms are available.

Buses are available from all the places in Andhra Pradesh to reach the temple at Jonnawada which is 13 km away from Nellore.

Nellore is the nearby railway station which is 12 km away from the temple.

The Tirupati Airport is the nearby airport in Renigunta which is 132 km away from the temple. Bus and Taxi services are available from here to access the temple.