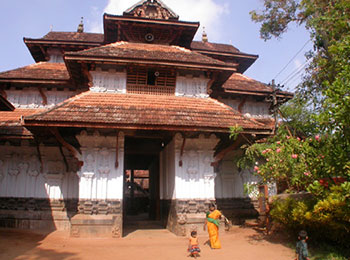 Sri Mahadevar (Irattai Appan) temple is located in the city of Peruvanam, Trissur, Kerala and is about 2000-3000 years old. 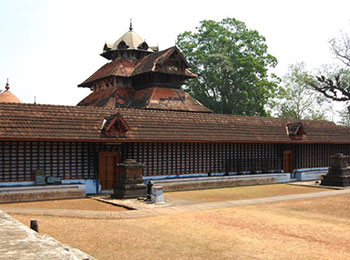 Also there are four Sastha temples namely Agamala Sastha in north, Vazhuthukavu Sastha in south, Kudiran mala Sastha in east and Edatiruthi Sastha in west covering all the four directions. Before starting any festival in the other 24 temples, the administrators of these temples obtain the permission from Lord Shiva at the Peruvanam temple and perform poojas here. Mother Parvathi has a separate shrine as do Lords Dakshinamurthy, Ganapathy and Kosala Krishnan.

As there are two (twin) Shivalingas in this single temple, this is called Irattai Appan (Twin Lords) temple. Also two Lingas are installed on a single Avudayar-Peeta. Lord Shiva graces in Arthanareeswara form (half male, half female) facing west. The temple is installed by Sage Parasurama.

It is said that Sage Pooru performed intense worship here. Pleased, Lord Shiva appeared before the sage in His Arthanareeswara form along with Mother Parvathi. The Lord also gave the sage a Shiva Lingam and created a spring to be utilized for performing abhishekams to the Linga. The sage drew 3 lines with his fingers.

As he touched the earth and made a spring, it is called Thodukulam. Once, the sage kept the Linga in a banyan tree before going for a bath but could not take it back while returning. He took 24 steps, climbed and performed his worship. After this incident, 24 steps are made here to see and worship the presiding deity. The place which was called Pooru Vanam after the sage was later changed as Peruvanam.

Peruvanam temple is 12 km far from Trissur on the Tiruparayar road.

The Nearest railhead is at Trissur

The Nearest air terminal is at kochi