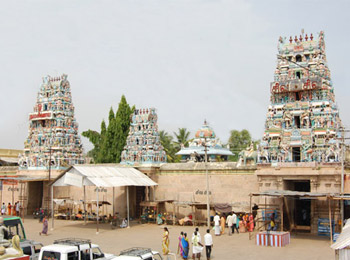 The Magudeswarar Temple is located in Kodumudi and is dedicated to God Magudeswarar. Although the temple has the name Magudewarar, this temple is a Mummoorthi Temple. It has the three deities of Brahma, Veeranarayanapperumaal (Vishnu) and Magudeshwarar (Shiva). These three Gods form the Hindu Divine Triad with their individual responsibilities of creation, preservation and destruction. The Goddesses here are Thirumangai Nachiyar (Soundhraambigai) and Mahalakshmi. God Brahma has no goddess. The temple has separate theerthams named as Bharadhwaja Theertham, Brahma Theertham, Deva Theertham and Kavery Theertham. God Magudeshwarar is called by various names as Paandi Kodumudi Nathar, Malaikozhundheesar, Magudalingar, Kodumudeshwarar, etc. the sacred tree of this temple is the Vanni Tree (It is said to be 3000 years old and its leaves are using in kavadi theertham).

Historians are not able to estimate the age of the Vanni tree of the temple. It is too ancient. If a leaf of the tree is put in a pot of water, the purity lasts for years. Those carrying Theertha Kavadi –Water Pots-to Palani for Panguni Uthiram (March-April) festival place this leaf in the water pots.

Lord Brahmma has three faces in this temple against four attributed to him. Vanni Tree is supposed to be His fourth face. Sages Agasthya and Bharadwaja had Lord Shiva’s wedding darshan here. Nagar worship (serpent worship) is popular here as the divine serpent Adisesha was for instrumental for the coming up of the temple. Sri Anjaneya appears with biting teeth taking the Sanjeevi hill northward– the hill that contains wealth of herbals. There is a bell on his tail. Lord Vyakrapada Vinayaka graces in a pillar in Perumal shrine. Vinayaka has the feet of a tiger and the face of an elephant, a very rare form. Lord Magudeswarar is also praised as Malai Kolundeeswarar and Mother as Soundaryanayaki and Vadivudainayaki.

A competition arose between Adisesha and Vayu the God of Winds about their might. They put the Meru mount at a centre which was tightly held by Adisesha. Vayu blew with all velocity to push Adisesha. Meru split into seven pieces, each as a Gem Shivalinga. The diamond piece fell in Kodumudi. This is a place for Naga worship. Majority of the devotees come here seeking relief from adverse effects of serpent planets.

11 day Chithirai Tirunal festival in April-May is the main festival of the temple. Devotee crowd will be huge on the Aadi Perukku day in July-August. Special Pujas are performed in the temple on new moon, full moon days and on Pradosha days-13th day of new moon or full moon days, a day of great importance for Lord Shiva worship.