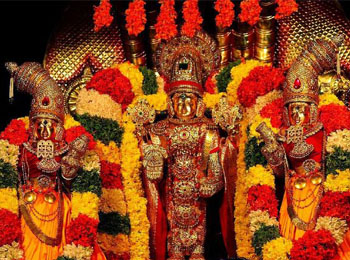 Manyamkonda Sri Venkateswara Swami Temple located up Manyamkonda hill in Mahboobnagar district of Telangana state. Lord Venkateswara is presiding deity here and it is called as Harihara Kshetra. It is also called as Palamoor Tirupathi.

The main deity, Lord Vishnu is worshipped here in the form of Venkateswara Swami and Goddess Laxmi is also worshipped.

It is one of the ancient temples dedicated to Lord Venkateswara Swami. It is considered as one of the important spiritual centres in Mahboobnagar District. Here pilgrims can have a glimpse of the ancient caves where the sages were believed to have undergone penance. This temple is located in a cave which is reportedly balanced on top of the three hills. One can enjoy the nature’s splendour and scenic beauty at the temple. The temple has a beautiful Rajagopuram with the images of the Gods and Goddesses carved on it.

In the ancient days sages like Narasimma Yogi, Kasirayalu, Ettepu Ramayogi, Veerappaiah and Yanumaddhasu were believed to have meditated here and hence it is known as Munulakonda. With the passage of time it has been referred to as Manyam Konda.

Apart from regular pujas, annual festival known as Jaathara is held on the day of Magha (mid-February to mid-March) Purnima is celebrated with special pujas.

Nearest airport is Rajiv Gandhi International Airport which is 109 km away from the temple. Travel bus and taxi services are available to access the temple.

Nearest railway station is Mahboobnagar Railway Station which is 27 km away from the temple. Govt RTC buses run from here to reach the temple.

Govt RTC buses are available from all places in Telangana to reach the temple in Mahboobnagar.