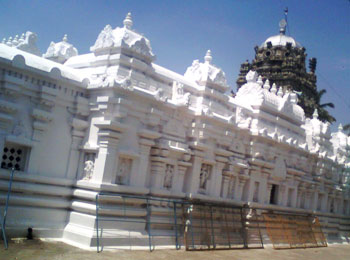 
Sri Kurmam is a village near Srikakulam, Andhra Pradesh, India.


According to inscriptions in the temple dated 1281 AD, the holy place of Kurmakshetra was reestablished by Sri Ramanujacharya under the influence of Jagannatha Deva at Jagannatha Puri. Later the temple came under the jurisdiction of the king of Vijayanagara. The temple is dedicated to Sri Kurmanatha, the second avatar of Lord Vishnu, Kurma Avatar. There is another temple of Kurmanatha in Kurmai of Chittoor District of Andhra Pradesh,India. There is also a Yoganandha Narasimhan temple in front of Sri Kurmam temple. Simhachalam Devasthanam took the responsibility for the temple improvement. The moolasthanam (central piece) is considered to be large saligrama.


Lord Vishnu is worshipped in the form of the Kurma Avataara


The most sacred and ancient shrine  of sri kurmam, situated on the shores of the Bay of Bengal,  is the only Swayambhu temple in the world where Lord Vishnu is worshipped in the form of  kurma avataara (Tortoise – The second Incarnation of the famous Dasa Avataaraas). This ancient shrine is believed to be prior to the golden era of Sri Raama (Raama Raajyam). Prominent references about this shrine are available in Kurma , Vishnu, Agni, Padma, Brahmaanda Puraanaas. While the shrine is said to be more than a few million years old, outer structures were reconstructed many a time - after dilapidation of previous one, and the latest temple structure of outer walls is more than 700 years old. Legend says that during Kruta yuga, a pious king - Sweta Maharaj, observed fierce penance for many years. Fulfilling his wish, Lord Vishnu manifested (Swayambhu) here in the form of Kurma  Aataar. Lord Brahma, the creator of the universe, officiated the celestial rituals and consecrated the shrine with gopaala yantra. Sweta Pushkarini (The Lake in front of the Temple) is formed by the Sudarshan Chakra. Sri Mahaa Laxmi (the consort of Lord Vishnu), emanated from this lake and is adored in the name of Sri Kurma Naayaki, in Varadaa Mudra posture seated on Garuda Vaahana.

Sri Kurmam shrine is believed to be the “moksha sthaanam” and the Sweta Pushkarini has cosmic cleansing powers. So, like in Varanasi, people perform the last rites of the deceased and drop (Nimajjan) the Asthikaas (ashes) in it, which eventually metamorphose into Saalagraamaas (divine stones). Even mother Ganga takes a bath in this lake every year on Maagha Shudha Chavithi (around February) to cleanse herself of all the sins left by the devotees. The Prasaadam of the lord is said to possess mystic curative powers – after taking this Prasaadam, the celestial dancer “Tilottama” became devotional and enunciated desires. King Subhaanga won the war, a devotee by name Vaasu Deva got leprosy cured.

Unlike many other temples , the presiding deity here is facing west and hence there are two “dwaja stambhaas” (flag posts) in east and west directions. This is also the reason to permit devotees to enter the “garbha graha” (sanctum sanctorum) for a closer darshan of the lord. This temple is known for its marvellous sculpture, particularly on the southern entrance, apart from the 108 pillars, where no single pillar is similar to the remaining. The unique stones on the floor in the pradakshina mandapam (Circumambulatory passage) are said to infuse magnetic energy into the devotees through their feet. The ancient mural paintings (frescoes) on these walls, made from natural colours, resemble those in ajanta – ellora caves. “kaasi dwaram” – the underground tunnel to varanasi in the north eastern corner of the pradakshina mandapam is another magnificent piece of ancient engineering skills. The entry is closed now, since many wild animals and snakes are entering the temple.

To protect this temple from the foreign invaders during 11th - 17th centuries , like in many temples in south india, the locals applied lime stone mix on the entire temple complex and camouflaged as a hillock. The solidified limestone layers are still being peeled off now , and the same are visible even today on the temple walls. Temples are the pivots of hindu culture.  Many of our fore fathers sacrificed their lives to protect these invaluable treasures for posterity. With only 3 of the 29 ancient civilizations remaining, and hinduism being one of them, the present generation has the inescapable responsibility to protect, if not further develop, and pass on to the next generations.

As the great sages said “conserve the nature – preserve the culture – to deserve a future”.

Many straws when twined together make a rope - many drops make an ocean, and your generous offerings, however small or big, will go a long way to safeguard our ancient temples like sri kurmam.

Some of the main Festivals being celebrated in the Temple are the 3 day Dolotsavam (Falguna Paurnami - popularly known as Holi) , One day Annual Kalyanotsavam (Vaisakha Shudha Ekadasi) , One day Annual JanmaDinam (Kurma Jayanthi) Festival of Deity on Jyeshta Bahula Dwadasi, One day Festival on Mukkoti Ekadasi etc

Abhishekam (TiruManjanam)
Timings : Everyday Between 4.30 AM to 6.00 AM
Kalyanam Timings : Around 9 AM, only with prior bookings

Darshan is allowed from 6 am to 7.45 pm on all days,with very short intermittent closures for Poojas of the Deity. There is a facility for faster/special darshan, for those in a hurry, with special tickets at a nominal amount of rupees ten. Generally it takes less than 30 minutes for Darshan with all devotees being Allowed into the Sanctum Sanctorum (Garbha Gruha).

Sri Kurmam, situated on the shores of Bay of Bengal, is easily accessible by Road, Rail and Air. It is about 13 Km from the district Head Quarters town of Srikakulam, which is conveniently located on the National Highway 5 from Chennai to Kolkata. Visakhapatnam City is about 110 Km from the Temple. Ample Parking space is available in front of the Temple for Four/ Two wheelers (Self/ Chauffer driven).

The nearest Railway Station is called Srikakulam Road (Amadalavalasa village - Station Code CHE) which is on Chennai Kolkata Trunk Route and most Express/ Mail/ Special Trains have halts. It is about 12 Km from Srikakulam Town and 25 Km from the Temple. Regular city Buses/Auto Rickshaws/ Taxis are available.

The Visakhapatnam Airport is the nearest and is about 115 Km from the Temple. Many Airlines have frequent flights and connect to major cities in India. Air India/ Indian Airlines, Jet Airways, Jetlite , Kingfisher, Spicejet, Indigo etc operate daily flights. A few International Airlines are planning to start their operations soon.