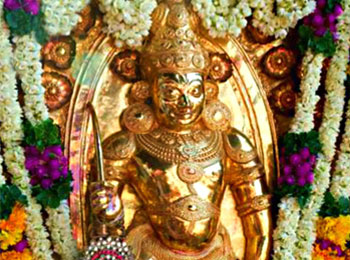 Sri Krishna Temple is located in Ambalappuzha which is a small town in the Alappuzha district of Kerala. The place is most popular for this ancient Krishna temple, which was built by the local ruler called 'Chembakasserry Pooradam Thirunal Devanarayanan Thampuran' in 790 AD. It is said that when Tipu Sultan raided cities and towns around that place in 1789 AD, the idol of Lord Guruvayurappan from the Sri Krishnsa temple, Guruvayoor was brought to this Ambalappuzha Krishna temple for safe guarding it.

During the fifteenth century, a part of the Travancore was ruled by the Chembakassery Devanarayana Dynasty whose rulers were so religious. They decided to bring an idol of Lord Krishna from the Karinkulam temple to the Amabalapuzha Sree Krishna Swamy Temple. The festival celebration starts with the commemoration of bringing of this Sri Krishna idol. This is also referred to as the Chambakulam Moolam water festival. This festival is conducted every year on the Moolam day of the Mithunam month of the Malayalam calendar. One other festival is the Aaraattu festival which commences with the flag hoisting ceremony on the day of Atham star in the malaylam month of Meenam (March to April). The important Aaraattu festival takes place on the Thiruvonam day of the same month. Pallipana is performed in this temple once in twelve years. Human sacrifices were made in ancient times. However, cocks have now replaced humans on the sacrificial altar.

Ambalappuzha Sri Krishna Temple is a Hindu temple dedicated to Lord Krishna who is one among the ten incarnations of Lord Vishnu. The idol of the deity here is similar to Parthasarthi, with a whip in the right hand and a Shankhu (sacred conch) in the left.

The temple is very famous for its 'paayasam' (a kind of sweet pudding made of rice and milk) which is served as the prasadham. There is also an interesting legend behind it. It is said that Lord Krishna once appeared in the form of a sage and challenged the local king to a game of chess (chaturanga). It was decided that the loser of the game would pay rice to the winner as a penalty. The quantity of rice grains would be determined using the chess board in a particular manner as described. One grain of rice would be placed in the first square, two grains in the second square, four in the third square, and so on. Every square would have double the number of grains of the previous square. The king lost the game to the Lord, and as a result, he had to pay Trillions of tons of rice to the Lord in the end, as the number of grains was geometrically increasing for every square and the chess board had 64 squares. The king didn't have enough grains in his kingdom to pay the Lord. Hence it was mutually agreed that the king would serve paayasam to the devotees of that temple everyday till the debt was paid off. It is believed that Guruvayoorappan visits the temple daily at the time of Palpayasa Nedyam to have it.

Trivandrum International Airport, which is about 139 km away

Ambalapuzha railway station is the nearest and is just about 2 km away; Alappuzha station is about 14 km from the temple.