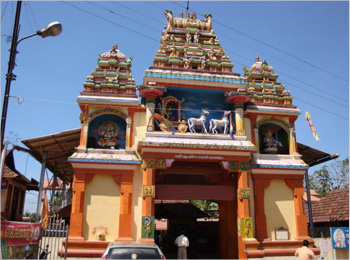 
Sri Krishna Swami Temple is located at Todupuzha in the northern side of Todupuzha River. The main deity is Sri Krishna. The sub-deities are Bhagavathy, Ganapathi, Shiva and Naga. The owners are the famous Nedumbilly Mana, who has the right for conducting Tantric rites in the famous Sri Padmanaba Swami Temple of Trivandrum.


There is an exciting legend behind the deity. A village named Laxmi was very rich in Vedic scholars, artists and variety of eminent personalities. A man with abundant Vedic knowledge decided to go for Sanyasam (hermit). During his travel he reached Todupuzha and meditated upon Lord Krishna. During the meditation he had a vision of Lord Krishna splitting the beak of an Owl when it attempted to swallow Him. He opened the eyes and found Lord Krishna standing before him who soon disappeared. The Sanyasi (hermit) lit a lamp at the place where the Lord was standing. During this period Kizhmalanadu King visited the place and constructed a temple.


There is a ten day long festival in the Malayalam month of Meenam (March-April).


Kuruppanthara is the nearest railhead.


There are regular buses from other major cities to Todupuzha.