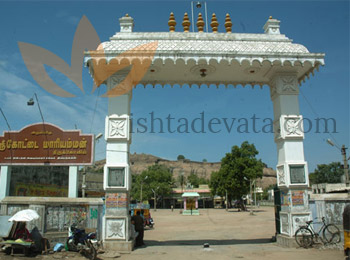 Kottai Mariamman Temple is a several hundred year old Saivite Temple at Begampur, Dindigul. The goddess idol was installed here by warriors who belonged to Tipu Sultan army at a Peedam. The Temple was constructed several years later. Devotees carry fire pot, Maa Vilakku and perform Abhishekam and archana to the goddess as their thanks giving. Devotees believed that the goddess will bless them with child boon and save them from prolonged diseases.

Sri Kottai Mariamman Kovil is a 200 year old temple which has an idol of Kottai Mariamman, installed by Tipu Sultan. Other important idols in the temple include Lord Vinayaka, Lord Murugan, Goddess Kali, Goddess Durga and Madurai Veeran. It has been constructed in the shape of a square at the fort of the mountain.

The Mariamman idol is said to be installed by the army men of Tippu Sultan at the fort of the mountain. Hence it is called Kottai (Fort) Mariamman temple of Dindigul. The historical name of the Sri Kottai Mariamman temple is called as Dhandeeswaram. There are three special entrances to the temple. The processions are arranged through the front entrance. The main idol in the sanctum is installed on the floor of the temple and Sakthi is always designed with golden Kavacham during the festival.

The temple is constructed in the shape of a square. There is a temple for Vetri Vinayaka at the South & Lord Muruga at the North of this temple. There is a Mandapam (Hall) in the center of the ground in which there is a sculpture of a Lion facing the Sannidhi. The Sanctum Sanctorum is small & square shaped. The deity consecrated (Moolavar) is seen here, embedded deeply under the floor

There are several sculptures on the sniper structure over the Sanctum Sanctorum, depicting various incarnations of the goddess Mariamman. All the four sides, various scenes showing the destroying of monster by the goddess are seen. On the eastern side over the Amman Sannidhi is a temple for Vinayaka and on western side a temple for Madurai Veeran. On the front side of Sannidhi the Navagraha idols are installed. On the back side of the temple, there is an idol of Kaali and another one for Durga. The temple is situated in such a large area as 2 acres. The golden shield will adorn the deity on every day between 5 PM to 9 PM.

A post called Kamba Thadi made with copper is at the entrance of the shrine. The temple is run by a board of Trustees.

During the 18th century, there was only a small peeta and the idol of the deity. The army men of Tippu Sultan built a small mutt and installed the idol, which today is the Kottai Mariamman and guardian deity of the people of Dindigul. There are three special entrances to the temple. The processions are arranged through the front entrance. Other entrances are close to the Fort. The temple celebrates a 20 day festival each year.

Soon after the new moon day in the month of Masi, (February-March), on the fifth day, the festival flag would be hoisted for a 20 day celebration in the temple. The festival continues for 30 days also in some years.

Devotees pray for child boon. It is also believed that praying to Kottai Mariamman effectively relieves the devotees from sickness, small-pox, prolonged illness and disabilities.

Devotees offer turmeric and salt at the foot of the post. Women perform a sacred abishek on the flag hoisting day hoping that the Goddess would be cooled down of Her anger and bless the people. Those seeking child boon carry fire pots. People blessed with the child carry the child in a cradle made of sugarcane and light flour lamps – Mavilakku. The crowd will be as high as 20 lakh during the festival days.

The nearest railways station is at Dindigul railway station.

As the temple is in the heart of the town, it can be reached both by buses and autos. It is 50 km from Madurai.