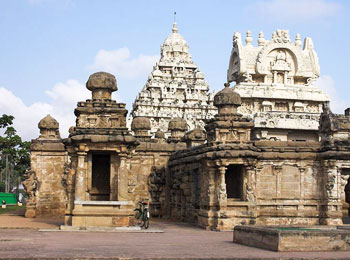 This is a Hindu temple dedicated to Shiva, located in Kottaiyur, a village on the outskirts of Kumbakonam. Lord Shiva is worshipped as Koteeswarar and his consort Parvathi as Pandhadu Nayaki. Koteeswarar is revered in the 7th century Tamil Saiva canonical work, the Tevaram, written by Tamil saint poets known as the Nayanmars and classified as Paadal Petra Sthalam, the 276 temples revered in the canon.

A sixty feet high, five-tiered gopuram adorns the entrance of this temple with 2 prakarams. An image of Manu needhi Cholan's episode is seen near the 2nd gopuram as in Tiruvarur. There is a separate vimanam for Somaskandar here. The Navagrahas are beautifully designed with their respective vahanas-vehicles. They are too enticing to look at. Only a few temples in Tamil Nadu have such Navagraha (9 planets) shrines. This is a sacred place offering good progress in education. Sage Markandeya worshipped the Lord here. The Shivalinga was found under castor nuts (nut in Tamil means Kottai), hence named Kottayur. Lord gave darshan to Sage Badri Yogi in 10 million Vinayaka form, 10 million Mother-Goddesses form, 10 Million Lord Muruga form – 10 million – one crore). Hence, the Lord is known as Koteeswarar. The nut symbols are visible on the Linga. Mother Goddess Pandhadu Nayaki (Goddess playing with a ball) is so named as she is tossing a ball under Her feet, indicating that she would toss the sufferings of Her devotees as that of a ball.

Satyarathi was the ruler of Tirihartha kingdom. His son Suruchi incurred a curse and was disfigured as a devil. Anyone seeing him began to run away. He wanted to attract all those who hated his appearance and worshipped Lord Shiva to get back his handsome face. He was advised to go to Kottayur and have a bath in the holy spring. He regained his handsomeness still better. Mainly, women follow this ritual to become beautiful.

Panguni Uthiram in March-April, Tiruvadhirai in Margazhi (December-January), Shivrathri in February-March, Arrow festival in Purattasi (September-October) are the important festivals celebrated in the temple.

Devotees pray for relief from evil aspects and to have a loving appearance. People bathe in this place and spill the water on their heads to have a beautiful appearance. Sports men and women worship the Goddess to win games and medals. Spilling the water of the holy spring – Amudhakinaru – ensures not only external purity but purifies the mind too, the belief goes. The spring ensures good education and good traits to the devotee. There is a proverb that those placing their feet in Kottayur will become Kattai (dead) meaning that sinners cannot enter this place. If they do so, their sins multiply to a crore. The benefits of good deeds also would multiply in crores. As many wicked people were afraid to come to the temple, it is said that Goddess Pandhadu Nayaki assured them protection by tossing their sins as a ball and reform them. Now, many people come here with the obvious aim of seeking the pardon of the Goddess for what they did in the past and lead a righteous life.

Nearby Places To Visit

The temple is 42 km from Thanjavur and 5 km from Kumbakonam on the Tiruvaiyaru route. The nearest railway station is Kumbakonam. The nearest airport is Tiruchi.