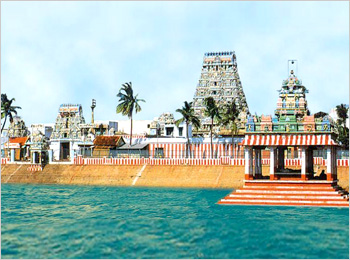 
The Kapaleeshwarar temple, located in Chennai, Tamil Nadu, is dedicated to God Shiva. In this temple, Shiva’s wife, Parvati is also worshipped in the form of Karpagambal. The temple is believed to have been built around the 7th century in Dravidian architecture. The religious abode boasts of a 120 feet tall gopuram that is studded with stucco images. The current standing structure is said to be around 300 years old. But, according to the temple authorities, the temple was stationed near the Santhome beach, which was destroyed by the Portuguese. This fact was mentioned by Saint Arunagirinathar in his literary works. 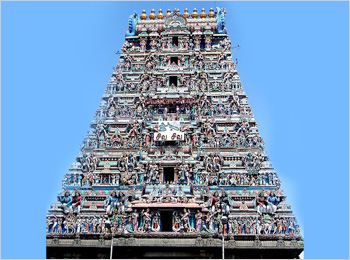 The Kapaleeshwar temple is renowned for its Dravidian style architecture. The temple is featured with a high gopuram which overpowers the street in which it resides. There are two entrances to the temple which are also marked with gopurams on either side. 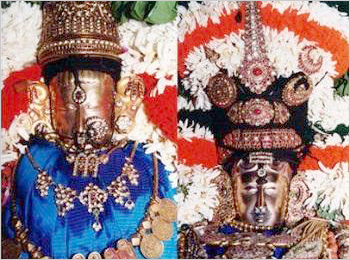 The Shiva lingam in the temple is a Swaymabu Lingam and is one of the 64 temples in the world. The Lingam is located in the main sanctum sanctorum and It has been decorated with flowers and vilva leaves, rudrashka garland and vibuthi. The Shiva linga is facing west and to the right of the sanctum sanctorum is the south facing shrine for the female deity Karpagambal. There are shrines for Singara Velar, Dakshinamurthy, Somaskandar, Durgai, Natana Vinayakar, Palani Andavar and Vaayilar Nayanar. In the courtyard of the temple, the devotees can witness a small shrine located under a Punnai tree which depicts Goddess Parvati in the form of a peacock worshiping God Shiva. It is based on this legend the area in which the temple is located got its name, Mylapore. (Mayil - Peacock , Oor – place) 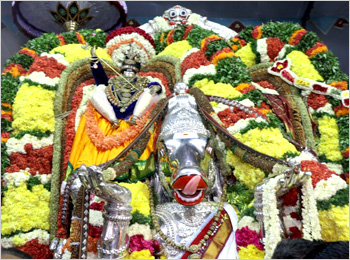 Legend has it that God Brahma thought that he was as awesome and equivalent as Lord Shiva as He too had five heads as Shiva. To show Him a lesson and to check His pride. Ruler Shiva nipped one head and grasped the skull. Kapala in Sanskrit implies skull, thus Lord Shiva was adulated as Kapaleeshwara and the spot Kapaleeshwaram. Also he got the name “Brahmasirachethamoorthy”. Another yore indicates that God Shiva came in the guise of a beggar seeking alms in the ‘kapal’ or the human skull, hence the name ‘Kapal-eeshwara’. Another reason given for the name is that Legend has it that Goddess Parvathi undertook a serious penance in Mylapore, assuming the form of a ‘ mayil’ [Tamil word for peacock], with a view to obtaining Shiva as her husband.


This temple is famous for 10 day Panguni Peruvizha that takes place in March-April including celebrations for 63 Saivite saints drawing a huge crowd of devotees. Huge number of devotee visit this temple on New Moon and Full Moon days and Pradosha days. Many Shiva related festivals are also celebrated in this temple every month.


Here devotees pray to Lord for mental peace and they pray Mother Karpakambika for child, marriage and family welfare. It is a great belief of devotees that their prayer brings them relief from any illness. Those suffering from any disease, carry sugar in a pot and distribute to devotees on the 8th day of Thaipoosam festival. They perform abishek and aaradhanas to Lord Mother offering vastras.


The Annadanam scheme, which was started on 2002 at the Kapaleeswarar Temple, has been extended to more than 100 temples in the State . On September 11, this scheme was launched formally at the Madhavaperumal Temple, Mylapore. In this temple everyday nearly 150 persons are served with free meals . Any one who wish to provide annadhanam for 1 day can donate Rs.2000. It has been planned to construct a annadhana koodam with kitchen and serving area near the temple to make the devotees feel comfortable. In these temples during special occasions vada and payasam are served . At the Kapaleeswarar Temple, they are served on occasions such as Panguni Uthiram, Aadi krithigai and Brahmotsavam. Some like the Ashtalakshmi Temple, Vadapalani Temple, Vadivudai Amman Temple and others serve appalam and payasam on Sundays


The devotees visit the temple to attain peace of mind, prosperity, blessing for early marriage and relief from illness, for sustainment / confirmation of the profession.


Chennai has both domestic and international airports. The airports are well connected to the rest of the city by road.