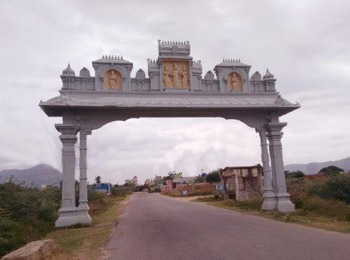 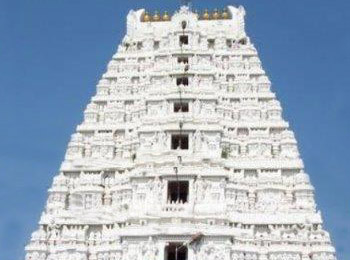 There is an Idol of the shrine Sri Mahalakshmi with the name of Sri Padmavathi Ammavaru in this temple.

The deity Andal is the only female Alvar among the 12 Alvar saints of South India. Sri Andal Ammavaru is credited with the great Tamil works, Thiruppavai and Nachiar Tirumozhi that are still recited by devotees during the winter festival season of Margazhi. Here we can observe the Idol of Sri Andal Ammavaru besides the main temple.

There is a small temple for Lord Rama, one of the Incarnations of Lord Vishnu along with Lakshmana, brother of Rama and Sita, consort of Lord Sri Rama.

In this ancient temple, we can observe the Idol of Lord Sri Vishnu in the form of Sri Ranganayakula Swami.

This temple is believed to be built before thousands of years or so. There is a 5 storied Gopuram built at the entrance of this temple. Narayana Vanam is believed to be the capital of Karvetinagar kings of Surya Vamsam in ancient days. This ancient temple of Sri Kalyana Venkateswara Swamy was believed to be built by brother of Padmavati Ammavaru and the son of Akasha Maharaja. It is believed that the Lord Sri Venkateswaraswami has married the Goddess Sri Padmavathi Ammavaru, the daughter of Akasa Maharaja at this place. There is a common belief that the Goddess Sri Padmavathi Devi offered prayers to Goddess Sri Avanakshamma before her marriage with Lord Venketeswara Swamy at this place.

Annual Brahmotsavams are conducted every year at Sri Kalyana Venkateswaraswami temple located at Narayanavanam village along with the other shrines present in this temple. Devi Navarathri festival will also be celebrated every year at this temple. Giri Pradakshina (Konda Chuttu Thirunallu) festival will also be celebrated in this temple at the end of Sankranthi festival, once in a year. Utsava murthis of Sri Parasareswaraswami, Sri Champakavalli Ammavaru, Sri Agastheeswaraswami and Sri Markathavalli Ammavaru will also be worshiped during this Giri Pradakshina Festival. Details of various special poojas and festivals conducted in this temple are shown below.