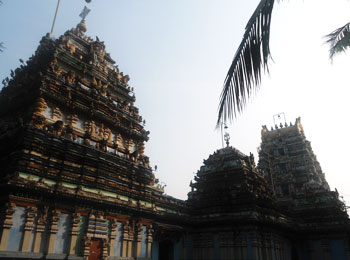 The temple is also called the Lord JaganMohini Keshava Swamy Temple. The art and architecture are very unique. The temple is reported to be a temple of an Amsa of Kaali with Uma and Lakshmi combined.

The idol is 5 feet tall and 3 feet wide. It is beautifully and gracefully carved out of a single black Saligrama stone. Lord Maha Vishnu who is shown here in the form of Keshava Swamy has four hands. He is shown holding “Shankha” and “Chakra”) in two hands while the other two hands hold “Gadha” and “Manthara”.

There is a temple for Lord Shiva in the form of Sri Uma Kamandaleswara Swamy in front of Lord Jagan Mohini Kesava Swamy temple. The legend of these two temples relates to Samudra Mathanam. Once Devatas and Rakshasas were quarrelling over sharing “Amrutham”. To rescue Devatas, Lord Vishnu in the guise of Jagan Mohini (a beautiful woman) convinced both groups to distribute the Amrutham equally. Rakshasas are known for danger and cruel activities, keeping this in mind Lord Vishnu distributed the Amrutham only to Devatas and disappeared. This was observed by Lord Shiva and followed the beautiful woman. A flower fell down from Jagan Mohin’s Plait and it was smelled by Lord Shiva. He came to know that the woman was Lord Vishnu and felt shy. The place where the flower fell down from the Plait of Mohini was named as ‘Ryali’ means fall in Telugu.