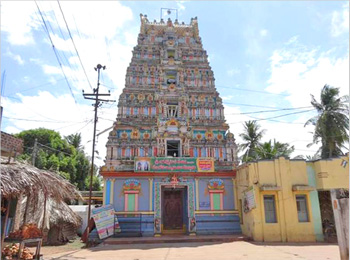 The area is also known as KonaSeema. It is well irrigated, and has many tributaries of the Godavari. Ryali is located in the East Godavari district in Andhra Pradesh. 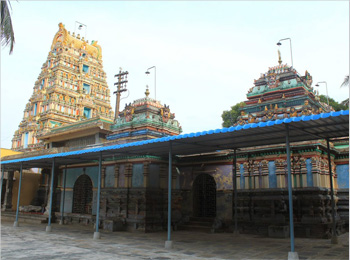 The Sri Jagan Mohini temple is located in this area. It is made out of a single piece of stone (Salagrama Ekashila - 5 feet height and 3ft width). The idol looks like Sri Vishnu (male) from front side and as Mohini (female) from rear side. The architectural beauty of the idol and temple is excellent. The flow of Akasha Ganga at the feet of Sri Maha Vishnu can be seen here. This place was a wild forest during the 11th Century and was ruled by Cholas. Raja Vikrama Deva originally constructed a small temple during the 11th Century and later renovated.

During the 11th Century, this village was a part of wild Forest and these parts were under the rule of Chola Rajas. Sri Raja Vikrama Deva who was ruling these parts during those days came to this place for hunting. Having been tired after hunting wild animals, he took rest under the shade of a big ponna tree, and fell in deep sleep and got a dream. Lord Sri Maha Vishnu appeared in his dream and informed that his shrine was located in the under ground of this area and directed the "Raja to get the wooden made chariot pull in the area and where the nail of chariot fell, the shrine can be found in the under ground of that place. Raja has done accordingly and the land where the nail of chariot fell was excavated and found the idol making the dream of Raja true. He constructed a small temple during 11th Century and arranged worship during his regime. Gradually prakarams were developed in the year 1936 (Data nama Samvatsara) it was renovated.The Shrine of Sri jaganmohini kesava Swamy varu is Salagrama Ekasila with 5 feet height and 3 feet width. 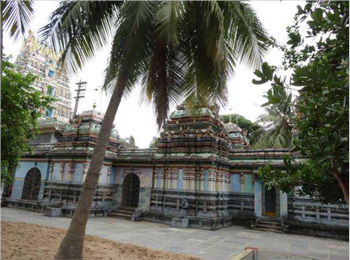 Salgramasila is the form of Sri Maha Vishnu. The idol of Sree Kesava Swamy varu of "Sri Mahavishnu" in front side and Jagan Mohini on back side. The ten incarnations Lord Sree Maha Vishnu with consorts, Sri Devi, BhooDevi, Sage Narada, Thumbura, Rambha, Urvasi, Kinnera, Kimpurusha, Lord Krishna with Govardhanagiri, Adiseshu, Garuda and Ganga are beautifully, sculptured around the shrine. The most miracle and rare feature is that, Ganga always flows from the feet of Sri Maha Vishnu is the origin of Akasa Ganga and this truth can be witnessed here. The most wonderful architectural beauty of Shrine, and flow of Ganga from the feet of Swamy varu are really unique features and shrine became very sacred. The architectural beauty of idol can not be described in words. Further it gives impression as it is new idol though its origin is of 11th Century. This shrine is "SWAYAMBHU" people visiting the temple form several parts of the Country believe that the shrine is not of man made but certainly creation of Devatas and Darsan of Swamy varu gives the feeling of presence of real God. 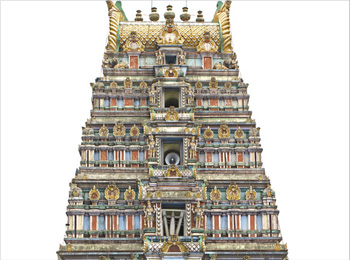 According to the legend "Bhagavatam" while Devatas and Rakshas were quarrelling over sharing of holy Divine nectar "Sree Maha Vishnu" came to the rescue of Devatas in the guise of Mohini and convinced both the rivalry groups promising to distribute holy Divine nectar in equal share to Devatas and Rakshas. But in the interest of universal peace and welfare of sages, holy and Divine nectar was distributed among Devatas alone and the Mohini disappeared. Lord Siva having seen the most fascinating beauty of Mohini allured her. This led to the birth of “AyyapaSwamy”. One flower from the plait of Mohini fell down and it was smelt by Lord Siva. Then he surprisingly found "Sree Maha Vishnu" in the form of Mohini and felt shy for his behavior. The place where the flower from the plait of Mohini fell is named as RYALI the Telugu meaning of "Fall".

There are guest Houses available here for the convenience of devotees which are: a choultry building with 8 rooms, and a guest House with 2 suites without furniture.

Government and Private Bus services are available from all major places in Andhra Pradesh and Telangana to Sri Jagan Mohini Keshava Swamy Temple in Ryali.

The nearest railway station to Sri Jagan Mohini Keshava Swamy Temple is Rajahmundry Railway Station which is 35km away.

Bus and Auto services are available to access the temple.

The nearest airport is Rajahmundry Airport which is 53km away. Bus and Taxi services are available to reach Sri Jagan Mohini Keshava Temple.